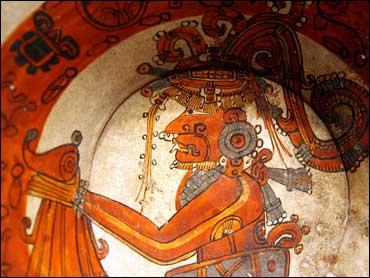 They were more than mere kings. They were gods.

For the ancient Maya, living in what is present-day southern Mexico, Guatemala, Honduras and Belize, their rulers ensured order in the cosmos; embodied the divine and carried out rituals so that their people would prosper.

2The craftmanship of the period reflected that reality, a new exhibition shows. "Treasures of Sacred Maya Kings" opens June 14 at the Metropolitan Museum of Art and runs through Sept. 10. The show features more than 150 objects primarily from Guatemala, Mexico and Honduras, some recently excavated, that highlight the connection.

"We don't have separation of church and state" among the Maya, said Virginia Fields of the Los Angeles County Museum of Art, who originally curated the show. "It's very much the involvement of supernatural forces and ancestors in maintaining the well-being of the community and the king is the one who is the intermediary between these supernatural beings and the human community."

So, Maya rulers would wear costumes and vestments that invoked the gods, like a crown in the show that features an image of maize, their most important crop, to show that the wearer had the power of the maize god and could bring about a good harvest. They took part in rituals, like bloodletting or imbibing hallucinogens, that were meant to connect them with their ancestors and with supernatural spirits for the good of the people. Even objects used in the rituals, like bowls or instruments to draw blood, were decorated with symbols to show the divine connection.

The exhibit has already been seen in Los Angeles and Dallas. The museum plans a range of programming to complement the exhibition. Julie Jones, who organized the show at the Met, said she hoped visitors would come away with an appreciation for the creativity and culture of the Maya.

"They were great artists, imaginative, inventive, intellectual, and it all shows up in their works of art," she said.