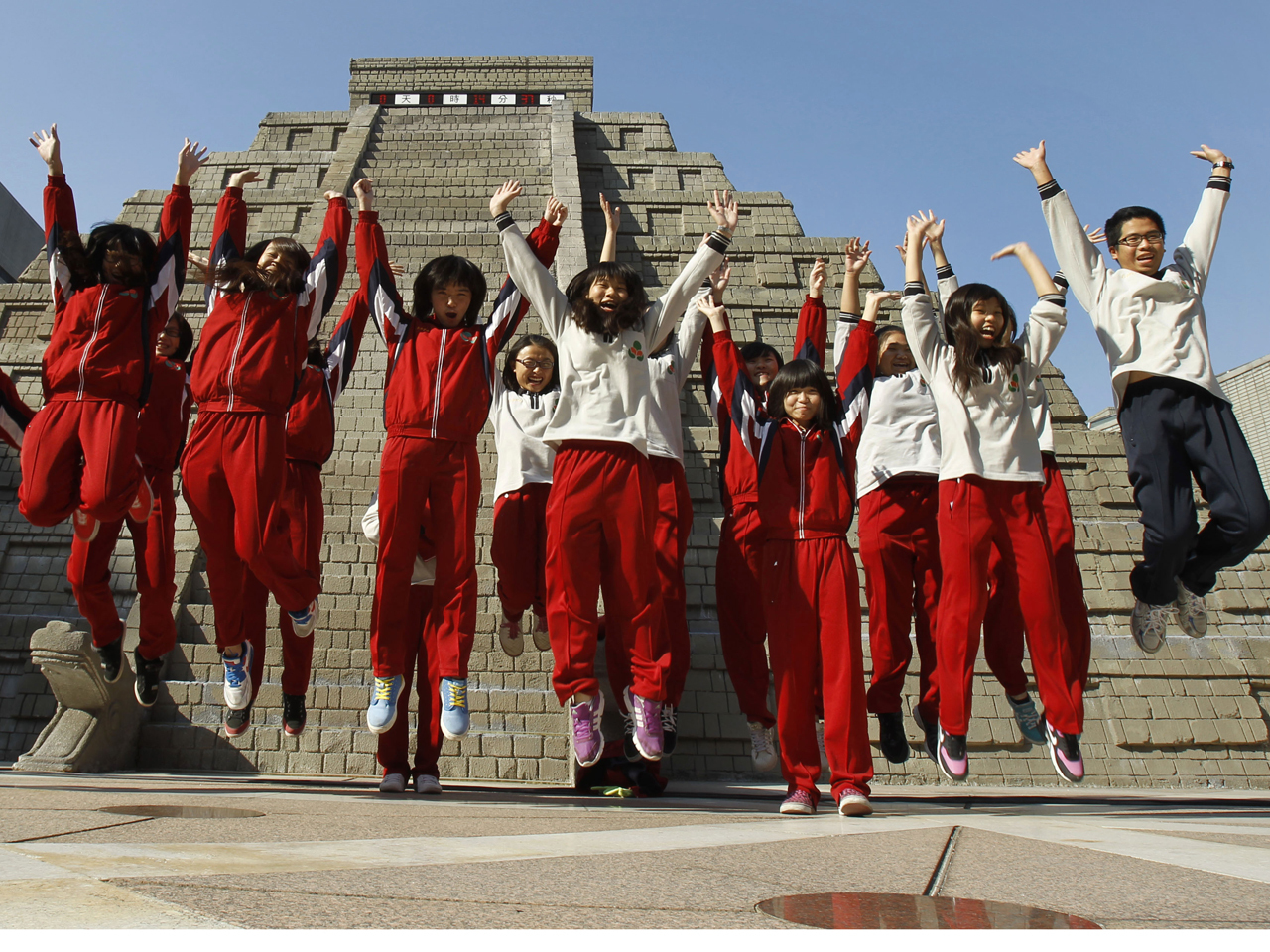 MERIDA, Mexico Dec. 21 started out as the prophetic day some had believed would usher in the fiery end of the world. By Friday afternoon, it had become more comic than cosmic, the punch line of countless Facebook posts and at least several dozen T-shirts.

At the ruins of the ancient Mayan city of Chichen Itza, thousands chanted, danced and otherwise frolicked around ceremonial fires and pyramids to mark the conclusion of a vast, 5,125-year cycle in the Mayan calendar.

The doomsayers who had predicted apocalypse were nowhere to be seen. Instead, people showed up in T-shirts reading "The End of the World: I Was There."

Vendors eager to sell their ceramic handicrafts and wooden masks called out to passing visitors, "Buy something before the world ends."

And on Twitter, (hash)EndoftheWorld had become one of the day's most popular hash tags.

For the masses in the ruins, Dec. 21 sparked celebration of what they saw as the birth of a new and better age. It was also inspiration for massive clouds of patchouli and marijuana smoke and a chorus of conch calls at the break of dawn.

The official crowd count stood at 20,000 as of mid-afternoon, with people continuing to arrive. That surpassed the count on an average day but not as many as have gathered at the ruins during equinoxes.

The boisterous gathering Friday included Buddhists, pagan nature worshippers, druids and followers of Aztec and Maya religious traditions. Some kneeled in attitudes of prayer, some seated with arms outstretched in positions of meditation, all facing El Castillo, the massive main pyramid.

Ceremonies were being held at different sides of the pyramid, including one led by a music group that belted out American blues and reggae-inspired chants. Others involved yelping and shouting, and drumming and dance, such as one ceremony led by spiritual master Ollin Yolotzin.

The boisterous crowd included Buddhists, pagan nature worshippers, druids and followers of Aztec and Maya religious traditions. Some kneeled in attitudes of prayer, some seated with arms outstretched in positions of meditation, all facing El Castillo, the massive main pyramid.

"The world was never going to end, this was an invention of the mass media," said Yolotzin, who leads the Aztec ritual dance group Cuautli-balam. "It is going to be a good era. ... We are going to be better."

Ivan Gutierrez, a 37-year-old artist who lives in the nearby village, stood before the pyramid and blew a low, sonorous blast on a conch horn. "It has already arrived, we are already in it," he said of the new era. "We are in a frequency of love, we are in a new vibration."

But it was unclear how long the love would last: A security guard quickly came over and asked him to stop blowing his conch shell, enforcing the ruin site's ban on holding ceremonies without previous permits.

At an indigenous South American summer solstice festival in Bolivia, President Evo Morales arrived on a wooden raft to lead a festival that made offerings to Pachamama, Mother Earth, on a small island in the middle of Lake Titicaca.

The leftist leader and 3,000 others, including politicians, indigenous shamans and activists of all stripes, didn't ponder the end of the world, just the death of the capitalist system, which Morales told the crowd had already happened amid "a global financial, political and moral crisis."

"The human community is in danger because of climatic reasons, which are related to the accumulation of wealth by some countries and social groups," he told the crowd. "We need to change the belief that having more is living better."

Despite all the pomp, no one is certain the period known as the Mayas' 13th Baktun officially ended Friday. Some think it may have happened at midnight. Others looked to Friday's dawn here in the Maya heartland. Mexico's National Institute of Anthropology and History even suggested historical calculations to synchronize the Mayan and Western calendars might be off a few days. It said the Mayan Long Count calendar cycle might not really end until Sunday.

One thing, however, became clear to many by Friday afternoon: The world had not yet ended.

John Hoopes, an assistant professor of anthropology at the University of Kansas, was at the ruins, using the opportunity to talk about how myths are created.

"You don't have to go to the far corners of the earth to look for exotic things, you've got them right here," he noted.

End-of-the-world paranoia, however, has spread globally despite the insistence of archeologists and the Maya themselves that the date meant no such thing.

Dozens of schools in Michigan canceled classes this week amid rumors of violence tied to the date. In France, people expecting doomsday were looking expectantly to a mountain in the Pyrenees where they believe a hidden spaceship was waiting to spirit them away. And in China, government authorities were cracking down on a fringe Christian group spreading rumors about the world's end, while preaching that Jesus had reappeared as a woman in central China.

Gabriel Romero, a Los Angeles-based spiritualist who uses crystal skulls in his ceremonies, had no such illusions as he greeted the dawn at Chichen Itza.

"We'll still have to pay taxes next year," he said.

As if to put the final nail in the coffin of such rumors, Bob McMillan of the University of Arizona's Lunar and Planetary Laboratory confirmed Friday that no large asteroids are predicted to hit anytime soon.

And Bill Leith, a senior science adviser at the U.S. Geological Survey, noted that as far as quakes, tsunamis and solar storms for the rest of the day, "we don't have any evidence that anything is imminent."

Still, there were some who wouldn't truly feel safe until the sun sets Friday over the pyramids in the Yucatan peninsula, the heartland of the Maya.

Mexico's best-known seer, Antonio Vazquez Alba, known as "El Brujo Mayor," said he had received emails with rumors that a mass suicide might be planned in Argentina. He said he was sure that human nature represented the only threat Friday.

"Nature isn't going to do us any harm, but we can do damage to ourselves," he said.

Authorities worried about overcrowding and possible stampedes during celebrations Friday at Mayan sites such as Chichen Itza and Uxmal, both about 1 1/2 hours from Merida, the Yucatan state capital. Special police and guard details were assigned to the pyramids.

Yucatan Gov. Rolando Zapata said he for one felt the growing good vibes, and not just because his state was raking in loads of revenue from the thousands of celebrants flooding in.