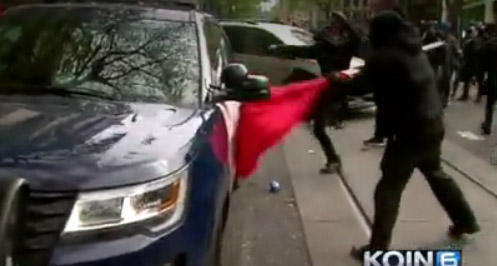 From New England to the Midwest to the West Coast, people chanted and picketed against Mr. Trump along with the traditional May Day labor rallies. Protesters flooded streets in Chicago. At the White House gates, they demanded "Donald Trump has got to go!"

In Portland, Oregon, police shut down a protest they said had become a riot and arrested more than two dozen people.

"Although peaceful protesters stayed on the planned route at the beginning of the march, things quickly got out of hand when a group of people became violent," the station says.

Police in Olympia, Washington, said nine people were taken into custody after several officers were injured by thrown rocks and windows were broken at businesses in Washington's capital city.

CBS Seattle affiliate KIRO-TV reports most of the trouble in Olympia was between groups of demonstrators.

In Seattle, five people were arrested during downtown protests and in Oakland, California, at least four were arrested after creating a human chain to block a county building where demonstrators demanded that county law enforcement refuse to collaborate with federal immigration agents.

Still, more than 1,000 people marched peacefully in Oakland representing labor groups along with Mexican, Vietnamese, Chinese, Filipino and other immigrants.

"It is sad to see that now being an immigrant is equivalent to almost being a criminal," said Mary Quezada, a 58-year-old North Carolina woman who joined those marching on Washington.

She offered a pointed message to Trump: "Stop bullying immigrants."

The demonstrations on May Day, celebrated as International Workers' Day, follow similar actions worldwide in which protesters from the Philippines to Paris demanded better working conditions. But the widespread protests in the United States were aimed directly at the new Republican president, who has followed aggressive anti-immigrant rhetoric on the campaign trail with aggressive action in the White House.

Mr. Trump, in his first 100 days, has intensified immigration enforcement, including executive orders for a wall along the U.S.-Mexico border and a ban on travelers from six predominantly Muslim countries. The government has arrested thousands of immigrants in the country illegally and threatened to withhold funding from jurisdictions that limit cooperation between local and federal immigration authorities.

In Chicago, 28-year-old Brenda Burciaga was among thousands of people who marched through the streets to push back against the new administration.

"Everyone deserves dignity," said Burciaga, whose mother is set to be deported after living in the U.S. for about 20 years. "I hope at least they listen. We are hardworking people."

In Shemanski Park in Portland, Oregon, before the violence broke out hundreds of people, including some families with children, gathered and watched dancers in bright feathered headdresses perform to the beat of drums.

Friends Marian Drake and Martin Anderson watched from a nearby park bench as they held balloons supporting the International Workers Union.

"Things are so screwed up in this country. You've got a city right here that's full of homeless people and you've got a president ...whose budget is going to cut 40 percent to the EPA and end Meals on Wheels. We don't like those kinds of things," Anderson said.

In cities large and small, the protests intensified throughout the day.

Teachers working without contracts opened the day by picketing outside schools in Philadelphia and Pittsburgh. Activists in Phoenix petitioned state legislators to support immigrant families.

Selvin Martinez, an immigrant from Honduras with an American flag draped around his shoulders, took the day off from his job waxing casino floors to protest. "We hope to get to be respected as people, because we are not animals, we are human beings," said Martinez, who moved to Los Angeles 14 years ago fleeing violence in his country.

The White House did not respond to requests for a response to the May Day demonstrations.

Several protesters, like 39-year-old Mario Quintero, outed themselves as being in the country illegally to help make their point.

"I'm an undocumented imigrant, so I suffer in my own experience with my family," said Quintero at a Lansing, Michigan, rally. "That's why I am here, to support not only myself but my entire community."

In Miami, Alberto and Maribel Resendiz closed their juice bar, losing an estimated revenue of $3,000, to join a rally.

"This is the day where people can see how much we contribute," said Alberto Resendiz, who previously worked as a migrant worker in fields as far away as Michigan. "This country will crumble down without us."

He added, "We deserve a better treatment."

While union members traditionally march on May 1 for workers' rights around the world, the day has become a rallying point for immigrants in the U.S. since massive demonstrations were held on the date in 2006 against a proposed immigration enforcement bill.

In recent years, immigrant rights protests shrank as groups diverged and shifted their focus on voter registration and lobbying.