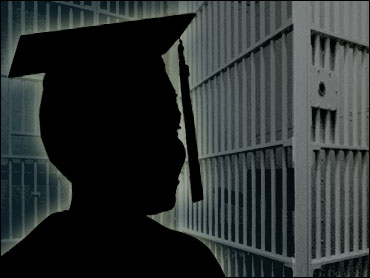 The United States is good at getting criminals into prison: we have over two million people incarcerated right now, more than any other Western country. But what we're not good at is keeping them out once they've served their time—half of all ex-cons end up right back in the penitentiary.

No one doubts that one of the best ways to rehabilitate criminals is through educating them while they're in prison, but who wants to pay for prisoners to go to college when most people have trouble coughing up money for their own kids' education?

Correspondent Bob Simon found one college that does. Bard, an elite private college is offering true liberal arts degrees to some inmates in New York state. It's not what you'd imagine goes on behind the bars of a maximum security prison. And by the way, the program doesn't cost taxpayers a dime.


It looks and sounds like an ordinary college graduation ceremony: there are caps and gowns, the handing out of diplomas. But a group of men receiving their degrees from Bard College will not be leaving to go out and make their mark on the world—they are inmates at the Eastern Correctional Facility, a maximum security prison in New York state.

Most prisoners ended up at Eastern Correctional Facility by committing violent crimes, like assault, rape, and murder, with sentences ranging from seven years to life. It's not the type of place you'd expect to walk into and find the inmates studying 18th century European history.

The Bard College program, which is privately funded, has been in this prison for six years and the academics are tough. One inmate tells Simon he and other inmates study five or six hours a day, outside of class, to make the grade.

The classes they take change each semester but what they have in common is that they're not practical courses—they're true liberal arts courses, like English, sociology, philosophy, and German.

Salih Israel pushed for a German course because, he says, he wanted to be able to read German philosophers in their original language. "I mean, you've got Hegel, you have Marx, you have Kant. A lot of those prevailing ideas – they're in German," he explains.

Salih Israel, by the way, is serving 20 to 40 years for shooting a woman in the course of a robbery.

"What do you say to somebody who says you should be learning a trade, some vocational training, instead of all this philosophy?" Simon asks inmate Joe Bergamini.

"Well, a vocational training will teach you how to do something, to have a job, but it doesn't teach you how to think, and I think that's the problem a lot of men in prison have is that they're not thinking, they're reacting. And a vocational program might give you the skills, to have a job, but it's not gonna give you skills to have a life," says Bergamini, who is in prison for killing his own mother 16 years ago.

Reshawn Hughes shot and killed a man the following year. He was far from being college material. Before he was incarcerated, Hughes admits he had never read a book. Now, he says he hopes to continue his education until he gets his Ph.D.

Wes Caines has already served 17 years for taking part in a shootout in which one man died and another was seriously injured.

He knows how lucky he is to be getting an elite education from Bard. "They made an investment in people that society had written off and people who even today feel that we shouldn't have this opportunity," Caines tells Simon.

Not every prisoner gets the opportunity; only about 10 percent of the inmates who apply to the college program are accepted. Prison life can be so routine and depressing, it's no wonder that these men jump at the chance to escape with their minds, if not with their bodies.

Travis Darshan dropped out of school when he was 14. When he was 17, he was arrested with two friends for robbing and killing a taxi driver.

Darshan never dreamed he'd get a college education. Asked how he felt when he got in, Darshan tells Simon, "Oh, I was elated. I was elated. It was, it was almost like they told me I was going home. … I really was. I felt like it was a new chapter in my life that it gave me a chance to start over."

"To these people locked up, this is just a psychological lifesaver. A string of hope even if their release is 10, 15, 20 years out," says Leon Botstein, the president of Bard College, a liberal arts college located about an hour from the prison but in every other sense worlds away.

The majority of students at Bard are white and privileged, like Max Kenner, who came up with the idea of the Bard prison program when he was a student in the 1990s. He had been volunteering in prisons and knew the inmates were hungry for an education, but few opportunities were available to them.

"I did not encounter one single superintendent who wasn't enthusiastic about the possibility of starting a college within that prison," says Kenner, who visited numerous prisons.

Asked if it is hard to get professors to teach in the program, Kenner tells Simon, "No one has once taught for us and not wanted to do it again."

How did she feel when she found herself in a room with prisoners and no guard?

"As soon as we shut the door and we began working, it was the most amazing experience," Ewing says. "We had an immediate rapport. And they took themselves and the work so seriously that I didn't have a moment to consider the absence of a guard."

"Did you have to make the course easier for the prisoners than you did for the students at Bard?" Simon asks.

"Once I was there three weeks, I just made it harder," she says. Ewing had to make the course harder, she told Simon, because the inmates studied harder.

The student-inmates have a room where they can study if they have free time during the day. Computers there, by the way, do not have Internet access. But much of their studying is done at night in their cells, surrounded by a constant din.

It may be hard to feel sympathy for criminals. It's also hard to get studying done here.

Travis Darshan acknowledges his cell does not make for an ideal study situation, but he says he manages by trying to block the noise out. "And when I begin to read, I try to focus in on my studies. And you kind of go into another world," he says. "You know, instead of hearing that noise, you just block it out. The distractions aren't available when your mind is centered on what you're reading."

Asked how the prisoners have surprised him, Bard College president Botstein says, "The most amazing thing, I have to say, the most shocking and absolutely unbelievable thing is that it takes radical incarceration, the loss of all hope to engender a genuine love of learning."

The Bard prison program isn't just at Eastern Correctional Facility—it is in four prisons in New York state and has about 120 students overall. Higher education in penitentiaries used to be common, but in 1994 Congress eliminated federal funding for prisoners to go to college and many programs folded. The issue was: why give free college educations to convicts when so many students who haven't committed crimes can't afford it?

Fisher says every study he's read shows that inmates given a college education are less likely to commit crimes once they are released. "Education changes people. And I think that's what prisons should do. Change somebody from one way of thinking to a different way of thinking," he says.

"It's a very liberal view of incarceration," Simon remarks.

"I don't think so. I think it's the logical view of incarceration. Going to prison is the punishment. Once in prison, it's our obligation to make them better than they were," Fisher explains.

And, he told 60 Minutes, inmates in college programs are easier for the prison system to manage. They tend not to stir up trouble by fighting and arguing, although when Simon and the team ran into a group of inmates in the prison yard, they were arguing about Rousseau and Machiavelli.

Listening to them talk, one could easily have been in a college quad rather than a prison yard. They spend their free time like so many undergraduates, exercising their intellectual muscles, debating century-old notions of ethics, morality and philosophy.

Wes Caines, like most of these men, has children. He says his daughters were his inspiration to go to college. "I really wanted them to have a father figure who, when they looked at their father, he's more than prison, he's more than a prisoner. So everything I've done has been in an effort to be someone that they can be proud of," he explains.

And he wanted to show them that if he could study hard, they could, too.

Asked if they're pursuing their education, Caines tells Simon, "Absolutely. My daughter just recently got accepted to the University of Pennsylvania, and that was, I've got to tell you, that was the best feeling in the world."

Remember Reshawn Hughes, who had never read a book before being incarcerated? He's not at Eastern Correctional Facility, the maximum security prison, anymore. He was transferred to a medium security penitentiary where he has a lot more freedom to roam around. There are no cells there; the men live in dormitories. But there are also no college programs.

"I'm sure 99 out of 100 prisoners would rather be here than at Eastern. How, this is a much easier, freer atmosphere," Simon asks.

"If you had a choice, would you go back to that maximum security prison at Eastern tomorrow if you could?" Simon asks.

"I would go right after this interview. If they packed me up, tell me, 'Let's go.' I would go right now, just to continue my education. Yes I would. I miss the Bard program tremendously," Hughes says.

He also missed seeing some of his fellow student inmates graduate this year. Most of them hope to continue their studies in prison toward more advanced degrees. There's no longer a lot of public opposition to college prison programs, but there's little government funding either, and private programs like Bard's are few and far between.

A world, which because of their crimes, they won't be seeing for many years.
Produced By Catherine Olian