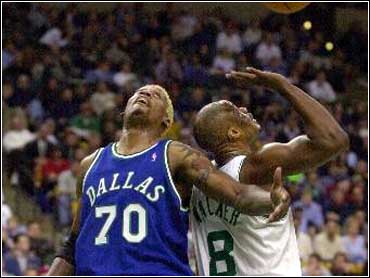 Dirk Nowitzki made Don Nelson look like he made the right decision in the draft two years ago.

The Dallas forward, drafted by Nelson one spot ahead of Boston's Paul Pierce in 1998, scored 26 points including a pair of key 3-pointers in the fourth quarter to lead the Mavericks a 108-100 victory over the Celtics on Monday night.

"They spotted him up and fed him," said Boston coach Rick Pitino. "He's a big guy who's a great shooter. He made the big shots when they needed him."

Dallas improved to 4-4 since the arrival of Dennis Rodman, who was on his best behavior as he scored four points and grabbed 16 rebounds.

"He's a legend," Boston forward Danny Fortson said of going up against Rodman. "I was very impressed."

Erick Strickland added 19 and Michael Finley finished with 17 for the Mavericks.

Boston used a 24-11 second-quarter run to take a 61-44 lead with 1:17 left in the first half and grabbed its largest lead of the game, 78-58, on Pierce's jumper midway through the third quarter.

But the Mavericks battled back with Pierce on the bench in foul trouble. Reserve center Sean Rooks scored all 11 of his points in a third-quarter run in which Dallas cut the deficit to four.

Dallas took its first lead since early in the first quarter when Rodman grabbed an offensive rebound and kicked it out to Finley, who sank a 3-pointer for a 90-87 advanage. Cedric Ceballos' three-point play capped a 35-9 spurt that made it 93-87.

"Offensively I had my game going, but rebounding-wise I didn't do my job," said Nowitzki, who finished with two rebounds, both in the second half. "I was just feeling it and they did a great job of finding me. I was wide open."

Antoine Walker led Boston with 23 points and also had seven assists and six rebounds. Pierce finished with 21 points in just 25 minutes while Vitaly Potapenko had 19 points and nine boards.

"We just turned the ball over too much in the second half," Pierce said. "We got a big lead, relaxed and it cost us the game."