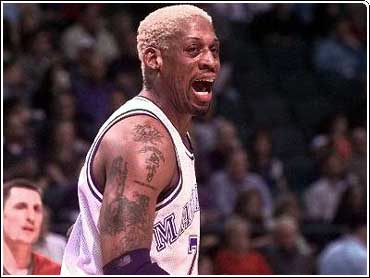 Dennis Rodman gave Dallas the rebounding it was looking for, but Gary Payton's all-around performance and Rashard Lewis' big fourth quarter spoiled the Worm's return and carried Seattle to a 117-106 victory Wednesday night.

Payton had 25 points, 14 assists and seven rebounds, and Rashard Lewis scored 16 of his career-high 30 points in the final period as the SuperSonics bounced back from a last-second loss in San Antonio for just their fourth win in 11 games.

Rodman, who had only one practice to prepare for his first game since April, was the reason the game drew a season-high 18,203 fans and he didn't disappoint.

In 32 minutes, he had 13 rebounds one shy of the team's individual season-high and had one assist on a long baseball pass. His every move was cheered and he made one woman's night by tossing her his No. 70 jersey as he walked to the locker room.

But Rodman also showed signs of rust. Rodman was caught in two illegal defenses, dropped a loose ball out of bounds with no one around and was whistled for five fouls. He missed the only shot he took, which was actually a tip, and he was slow to react to a give-and-go feed from Michael Finley.

Rodman caught the game-opening tipoff and drew the first foul. He also took a hard charge that left Ruben Patterson face-down for several minutes and in one pique of anger he nearly hurled the ball into the stands, but thought better of it.

The rest of the Mavericks struggled to feed off his energy. Dallas trailed by 16 in the first half, but a quick start to the final period got them within 96-92 with 6:24 to go.

Then Lewis took over. The second-year forward scored 11 of Seattle's next 14 points. The spurt inluded five points in five seconds on a follow shot and a steal that turned into a layup and a free throw. He also had a career-high 12 rebounds.

Finley had 26 points and five assists. Cedric Ceballos also had 26.

Payton did his damage early, scoring 16 points in the first quarter to steal the spotlight from Rodman.