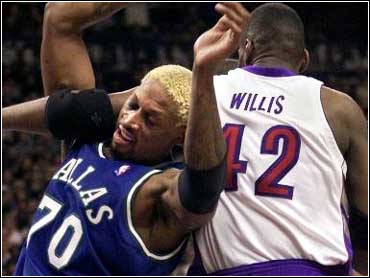 Dennis Rodman was at his mischievous best in his return to the Dallas Mavericks grabbing rebounds and attention.

The eccentric forward, who was suspended for a game after sitting on the court in protest last week, had a game-high 16 rebounds and a couple of sitdowns as the Mavericks defeated the Toronto Raptors 100-96 Sunday.

"That's nothing until I get into shape," said Rodman, who tried to slip a chasing media scrum though a backdoor. "This 38-year-old body needs a couple weeks to get into shape. I'm just out there relaxing, trying to get myself into a groove."

Cedric Ceballos and Michael Finley each scored 23 points and Erick Strickland added 18 as the Mavericks won their fourth road game in a row.

Vince Carter led Toronto with 24 points. Antonio Davis had 20 points and eight rebounds, and Tracy McGrady had 15 points off the bench.

"(Rodman's) just another player," said Carter, who fouled out late in the game.

Rodman, who had only one point off a free throw, entertained the crowd with his antics and received a huge cheer from the crowd when he fouled out with 22 seconds left.

Three minutes into the second quarter, Rodman began his first sitdown after not getting a call when he and McGrady made contact jumping for a rebound.

As he sat in protest, Dallas brought the ball up court, but when Toronto quickly came back the other way Rodman got back up.

The seven-time rebounding hampion continued his antics in the third quarter. After getting his fourth foul for hitting Davis, he briefly sat on the court again. Rodman stuck his hands in the front of his shorts and stood there for about 20 seconds.

"It's great to get Dennis back in the lineup," Ceballos said. "He's very talented and he put on a rebounding exhibition. He's able to intimidate and put people in bad situations. Hopefully, he's able to continue to do those things for us."

Dirk Nowitzki scored six points down the stretch for the Mavericks, including two free throws that gave Dallas a 95-94 lead with 2:04 remaining. Finley hit a 15-foot jumper a minute later, giving Dallas a three-point cushion.

"It was an unexpected win," Dallas coach Don Nelson said. "We were very worried about this game. Both Rooks and Rodman stepped it up defensively. The blending of our team is starting to come together."

Dell Curry keyed a 15-0 run near the end of the first half with a 3-pointer as the Raptors opened a 58-48 lead, but the Mavericks chipped away at the lead in the third quarter. Ceballos gave Dallas a 78-74 advantage entering the fourth when he converted a Rodman pass for a 3-pointer at the buzzer.

Carter tied the score 84-84 with 7:45 left when he stole the ball and ran the floor for a monster dunk. The Raptors took the lead 24 seconds later on Kevin Willis' layup.