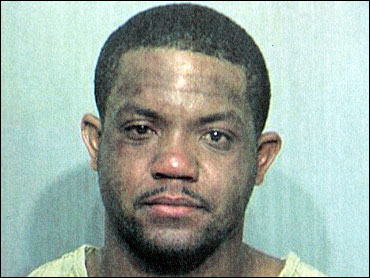 Maurice Clarett was charged with carrying a concealed weapon after a highway chase early Wednesday that ended with police using Mace on the former Ohio State running back and finding four loaded guns in his sport utility vehicle, police said.

"It took several officers to get him handcuffed," Woods said. "Even after he was placed in the paddy wagon, he was still kicking at the doors and being a problem for the officers."

The complaint police filed when they charged him with carrying a concealed weapon without permit said he had a 9 mm handgun under his legs in the driver's seat of an SUV.

Police also charged him with failing to maintain a continuous lane, which they said was for Clarett making a U-turn on the freeway. More charges are possible, Woods said.

Clarett did not speak to police who tried to interview him at the station before he was moved to the Franklin County Jail.

Wearing tan jail-issue clothes, he talked on the telephone in the booking area, separated from reporters by a window. He was to be held at the jail at least until an arraignment Thursday morning, unless his attorneys work out an agreement for his release, police said.

Clarett made an illegal U-turn on the city's east side and failed to stop when officers, in a cruiser with lights flashing, tried to pull him over, Woods said.

Police said they pursued Clarett onto the eastbound lanes of Interstate 70, one of the city's main freeways, when he darted across the median and began heading west. Clarett drove over a spike strip that was placed on the highway, flattening the driver's side tires of the SUV, Woods said. A police helicopter in the area helped track the vehicle.

Clarett exited the highway and pulled into a restaurant parking lot about 10 minutes after police say they saw him make the U-turn. Officers removed him from the SUV after he failed to obey numerous orders to exit the vehicle, Woods said.

After Clarett was placed in a police van, officers discovered a loaded rifle and three loaded handguns in the front of his vehicle, Woods said.

"We don't have any idea why he had them or what, if anything, he was going to do with them," Woods said. Police don't know where Clarett got the guns or where he was headed or coming from in the SUV. Federal authorities plan to trace the guns' ownership.

A half-full bottle of vodka was found in the SUV, but no breath test was administered because police had no indication that Clarett was intoxicated, Woods said.

Clarett, 22, is currently awaiting trial on two counts of aggravated robbery, four counts of robbery and one count of carrying a concealed weapon in a separate case. Authorities said he was identified by witnesses as the person who flashed a gun and robbed two people of a cell phone in an alley behind the Opium Lounge in Columbus in the early hours of Jan. 1.

One of the Clarett's attorneys in that case, Nick Mango, said he was going to the jail to see Clarett to "make sure he's OK emotionally and mentally." Clarett has not asked Mango to represent him on the new charges.

"I'm shocked as everyone else is about the allegation," Mango said. "Obviously, he's a young man with a lot of weight on his shoulders."

The home address Clarett gave police was his mother's house in Youngstown. A message seeking comment was left at the home.