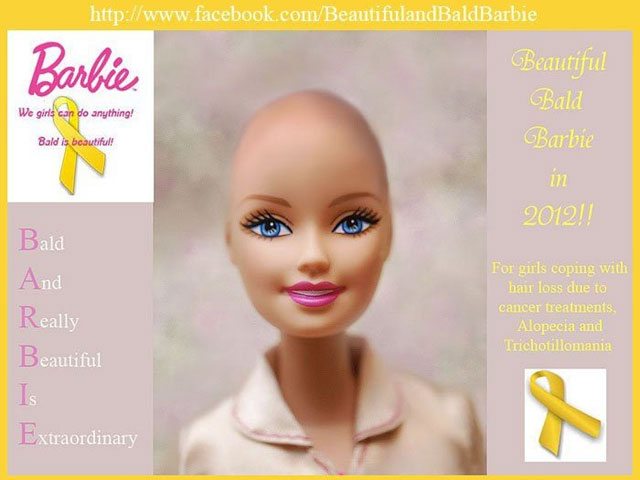 (CBS News) - Big news for the campaign for a bald Barbie: Mattel has agreed to manufacture a hairless doll.

Mattel company spokesman Alan Hilowitz told HealthPop that the company will produce a friend of Barbie that will have wigs, hats, scarves and other accessories to give children "a traditional fashion play experience." The kids will have the option to remove the wigs and head coverings.

The company stated that they will not be selling the dolls at stores, but instead will donate them to children's hospitals and other hospitals, as well as the National Alopecia Areata Foundation.

Jane Bingham, a photographer and the co-founder of the Beautiful and Bald Barbie! Let's see if we can get it made Facebook group, said that she's never thought her efforts to create a doll to help girls dealing with hair loss would gain so much support.

"We thought it would be popular with plenty of people, but we did not expect it to balloon the way it did across the world and throughout the media," Bingham told HealthPop. "It's been great, we couldn't have done it. They wouldn't have heard us if it was just a couple of people writing to them."

Bingham started the campaign for a bald doll with her friend Rebecca Sypin, who she met on a pregnancy chat room. Sypin's daughter and Bingham had both been victim's of blood-related cancers and lost their hair. The women realized that young girls who went through the disease or any disease that had hair loss as a symptom didn't have anyone to look up to.

"We are not demanding; we are not asking people to boycott," Sypin previously told HealthPop in January 2012. "That wasn't our goal at all. We're just trying to raise awareness."

The two started an online campaign and petition to promote the cause. After gaining support and much media attention, Bingham said they were invited to the Mattel headquarters in early February. They discussed their ideas about the doll with the doll manufacturer, and were told that Mattel would be putting the doll into production at a future date.

Mattel said they preferred to give the dolls directly to the children who would most benefit with them, instead of selling them for profit at retailers. However, Bingham still hopes that Mattel will change their mind and make the dolls available for sale. She believes there are plenty of women and girls worldwide that could benefit from having a bald doll.

"(We want girls to know) they're not dependent on their hair for their self-worth and their beauty. Women and children, it's looked down upon that you would go out without your hair. People would automatically assume that you're sick and you should stay at home in bed," Bingham says.

"We wanted to change this stigma especially for girls because they don't have many people to look up to," she adds.