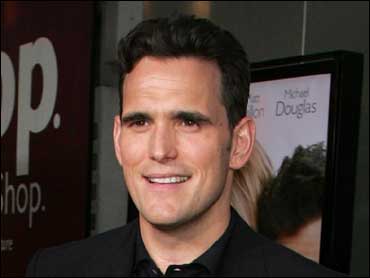 "I'm open to life now, even to marriage," says the "You, Me, and Dupree" star. "I'm open to the idea that things will work out. I absolutely value change now. I don't fear it. I accept it."

But things weren't always this clear to the never-married actor, whose career was launched by films like "Rumble Fish" and "The Outsiders" in the 1980s.

Dillon, who received an Oscar nod last year for his role in "Crash" ("it's a nice thing to get recognized"), dated actress Cameron Diaz for three years. When they split in 1998, he found himself dissatisfied with life, he tells the magazine.

"I was dissatisfied with where I was as a man, with my relationships, with my career. Like a lot of guys, I was driven by my work," he says. "I thought my career was who I was. It wasn't until later that I discovered I was more than that."

His relationship with Diaz had an impact on him. "I fell in love (with Cameron Diaz)," Dillon tells Parade. "It's a very powerful thing when you feel that way about somebody. Cameron was a muse for me. I hadn't been in any deep emotional relationships."

The 42-year-old admits to drifting in his personal life. "You roll from relationship to relationship because you're afraid of being alone," he says. "When I was lonely, I'd get into relationships just to alleviate the loneliness. I stayed in some too long. You need something to fill the emptiness. It can be another person, drugs, prestige or whatever. I've tried those things. They don't do the trick."

The recent success of "Crash" (it won the Best Picture Oscar)has "reinvigorated" the actor. He even gets philosophical about the possibility of having kids one day.

"I sometimes think love is God's way of hoodwinking people into having kids," he tells Parade. "You fall in love, and all that passion goes into procreating and wanting children. I've felt that need to want to raise a child. It's a creative urge."

The new issue of Parade is available on Sunday.