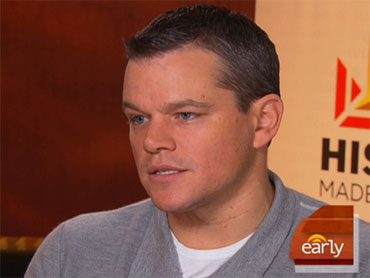 Matt Damon is a blockbuster star who is bringing his shine to the new historically-based film, "Invictus."

But history isn't just something Damon performs -- it's one of his passions. And one of his new projects stems directly from that interest.

Damon and fellow actor Josh Brolin appear in a documentary, "The People Speak," based on one of Damon's favorite books, "A People's History of The United States," by Howard Zinn.

"I started reading passages from it in 1980, actually," he said. "I remember when we got the book and for Columbus Day I took it in and was allowed to read parts of (it) to the class."

In the film, Damon's character says, "You want to read a real history book, read Howard Zinn's History of the United States."

First published in 1980, "A People's History of the United States" examines America's founding and expansion from the perspective of the revolutionaries, rebels -- and rarely heard voices of dissent.

Damon said, "It's just an honest look at where we've come from. And the idea that all these changes have been struggled for by everyday people. And that's a good thing. That being an American means participating."

After Zinn's book sold a million copies, his publisher wanted to commemorate the achievement.

Zinn told CBS, "And I asked (my publisher), "How do you propose to do?' 'Well, we'll do it at 92nd Street in New York. It's usual venue for events. And we'll have some historians on stage.' I said, 'Please. Not that.'"

Zinn had a better idea.

Zinn said, "It happened that I knew some actors, and I thought 'Yeah let's have some actors read historical documents.'"

As the format evolved, an idea for a film began to take shape.

Was there fighting about who was going to get to read what - what part?
Damon said, "On the contrary. There are so many things to be read that there - you know, that the big problem was cutting it into one film."

In all, 96 hours of historical prose performed by today's biggest stars was condensed to produce "The People Speak," which will air Sunday on The History Channel. Check your local listings for times.