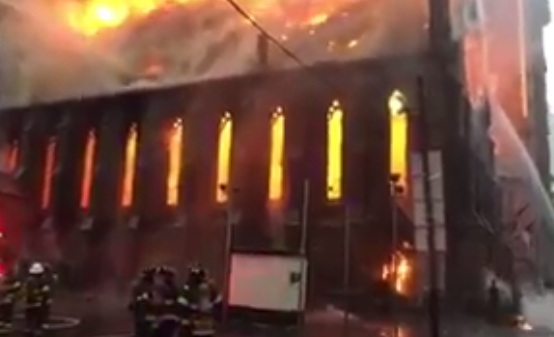 Firefighters are battling the massive fire at Serbian Cathedral of Saint Sava on West 25th Street in Manhattan. The fire began around 7 p.m.

Authorities say no serious injuries have been reported. Parts of the roof collapsed and smoke billowed from the Gothic Revival style building, CBS New York reported.

The fire broke out on the same day Orthodox Christians around the world celebrated Easter. The church website listed services that morning and an Easter luncheon at 1 p.m.

"My stepfather was in there, but he's fine. He just has smoke inhalation so everybody left thank God," parishioner Alex Elic told CBS New York.

His stepfather is the church caretaker who went into the burning sanctuary to try to douse the flames, but it was already too late and the blaze had rapidly spread.

"No one has been injured, there is no one reported missing, and that's the good news for today. The bad news is this church has been destroyed by fire," he said.

Hours after the fire began, firefighters were still pouring water on the charred remains of the building. All that was left standing was the church façade and that too was in danger of collapse.

It's possible that the entire structure may have to be torn down.

Chelsea Clinton joined those on Twitter praying for the church.

The FDNY tweeted video of the massive blaze, which Clinton shared.

A church priest, Father Djokan Majstorovic, says he felt like he was "in a nightmare" as he tried to get to the fire scene that was blocked off by firefighters.

The church was built in the early 1850s and was designated a city landmark in 1968.