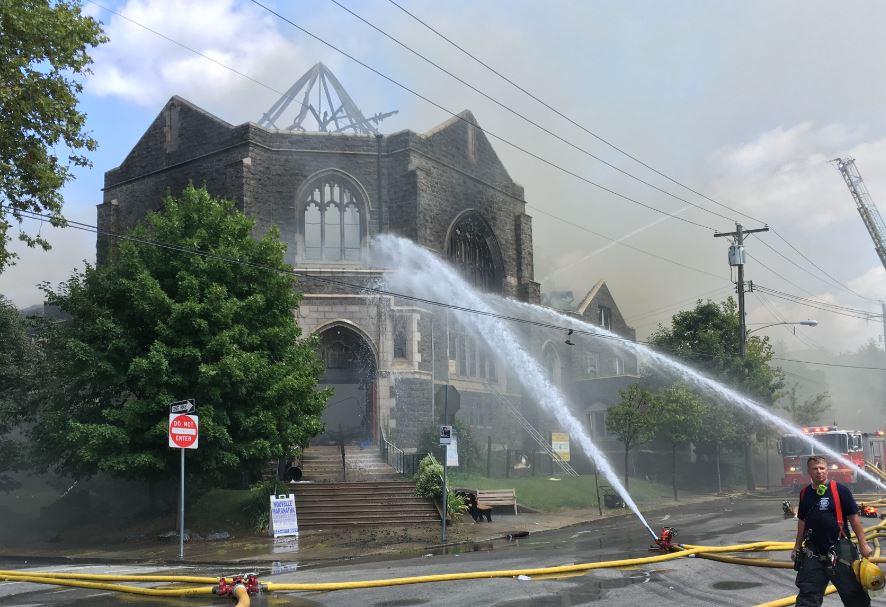 PHILADELPHIA -- A massive fire engulfed a century-old Gothic church that hosted many programs for young children and gay worshipers, but no injuries were reported.

The fire was reported Monday morning at a Presbyterian church in the city’s Overbrook neighborhood. Firefighters were on the scene in two minutes and needed about two hours to bring the fire under control.

Overbrook resident Stephen D’Alessio was nearby when he heard approaching fire sirens.

“I actually smelled the smoke in my kitchen. I asked my mother, ‘are you burning something?’ I came out of the house and saw the flames shooting out the side of the church windows. It was scary,” he told CBS Philadelphia.

Congregant Sherry Neal-Browne, who lives a block away, heard commotion and went outside to see flames shooting from the church’s front door and side windows and heavy black smoke pouring from its roof.

“It’s engulfed. It’s burning down right before our very eyes. It’s just very hard to see,” Neal-Browne said. “My son is 18 years old, he went to kindergarten there -- he’s in college now. So it’s been a part of our life for at least 19 years -- and to see it burn is tragic.”

The church, which partially collapsed, was home to a preschool, afterschool programs and a daycare center. It also was used by a lesbian, gay, bisexual, transgender and queer-oriented congregation. It wasn’t in use at the time of the fire.

Fire officials confirmed they found at least one person in the church during the fire and got that person out safely. No medical assistance was required.

Fire department officials said the blaze apparently started in the church’s basement. The cause of it was under investigation.

Fire crews had to retreat after discovering water pressure wasn’t high enough to fight the flames. They ordered an evacuation and focused on protecting houses behind the church after ensuring nobody was left inside it.

At least four other congregations used the church.

Pastor Pamela K. Williams, of the Ark of Refuge Tabernacle, an LGBTQ-oriented congregation, was tending to her son’s nosebleed at home when she received six calls telling her the church was on fire.

“We lost everything,” Williams said. “I just finished celebrating 35 years in the ministry yesterday with my church, and this on the heels of that breaks my heart.”

She said it’s been a struggle for her congregants to gain acceptance within mainstream Christianity. She said her congregation was based at a motor lodge before moving to the church five years ago.

“This is a devastating setback,” she said.

The flames were declared under control just after 11 a.m., with 121 firefighters contributing to the effort. The fire continued to burn inside the church, and fire department officials said they would be fighting hot spots for another few days.

“They have a lot of void spaces, and fire can travel,” fire Deputy Commissioner Robert Corrigan said. “It’s impossible to put out all the hidden fire from the outside.”