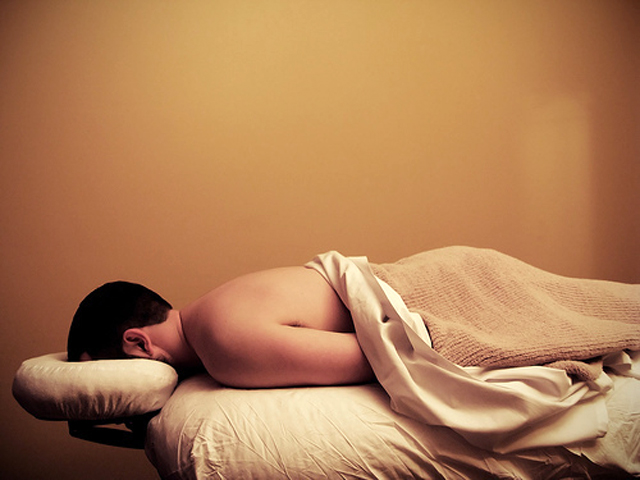 There may be more to love about massage than just the "ahhhhh." A new study shows that kneading muscles after hard exercise decreases inflammation and helps your muscles recover.

The study hints that massage after exercise may help relieve soreness, and may also help muscles become fitter faster -- two benefits that have thus far been mutually exclusive in the "no pain, no gain" world of athletics.

For the study, researchers put 11 men through a hard bout of exercise. It was the kind of session that was tough to finish and would normally have made an athlete stiff and sore for a few days afterward.

Following their workouts, each man got a 10-minute, Swedish-style massage, but only on one leg. The other leg was rested and used for comparison. Researchers repeatedly sampled muscle tissue from both legs before and after exercise.

They used gene-profiling techniques to look for chemical changes in muscle cells. They saw two main differences between the legs that were massaged and those that were rested.

First, massage switched on genes that decrease inflammation. Many painkilling medications also work by blocking inflammation. Second, massage activated genes that promote the creation of mitochondria, structures that are the energy factories inside cells. The fitter a muscle cell is, the more mitochondria it tends to have.

"If someone starts an endurance exercise training program, after two or four months of training, depending on the intensity, you essentially double the volume of mitochondria in muscle," says researcher Mark A. Tarnopolsky, MD, PhD, a professor of pediatrics and head of Neuromuscular and Neurometabolic Disease at McMaster University in Hamilton, Ontario, Canada.

Mitochondria, he says, help the cell to take up and use oxygen: "The muscles' ability to extract oxygen is proportional to the amount of mitochondria that are there."

"Exercise plus massage seems to enhance that pathway," Tarnopolsky says.

If further research can duplicate and expand on these findings, Tarnopolsky says that would mean that massage may be uniquely beneficial to muscle recovery and muscle growth.

In recent years, a number of studies have shown that remedies for muscle soreness that work by turning down inflammation -- things like ice baths or anti-inflammatory medications -- may also have a downside. They may also block muscle repair and growth, which depends on inflammation.

"People were starting to feel it was a one-to-one link: You suppress inflammation, you [lessen] adaptation," says Tarnopolsky. "But this appears to be an intervention that suppresses the inflammatory response but still allows, and actually enhances, the [recovery] response." The study is published in the journal Science Translational Medicine.

Massage May Be Serious Medicine

Experts who reviewed the study for WebMD say it is one of the first to document how human muscle cells respond to massage, a popular therapy that has struggled to gain respect as serious medicine.

And it echoes a 2008 study in rabbits, which found that rubbed muscle tissue recovered more strength after exercise than muscle tissue that was simply rested, with less swelling and inflammation.

As encouraging as these findings are, however, there's still a lot the study isn't able to say.

"If a massage gives you temporary respite from the pain, by all means, try it. However, these molecular changes may have no effect -- or may need to be elicited many times to have a lasting effect," Clarkson, who is distinguished professor of kinesiology at University of Massachusetts at Amherst, says in an email.

What's also not known is whether massage may still be helpful if a person gets a rubdown hours or days after a hard workout instead of just minutes.

Still, scientists who say they were once wary that massage had any real benefits, beyond relaxation, say they are starting to come around.

"I went into all of this truly skeptical," says Mark H. Rapaport, MD, chair of the department of psychiatry and behavioral services at Emory University in Atlanta.

"I've changed. I think there is something there. We saw profound biological changes associated with it," says Rapaport, referring to a 2010 study published in The Journal of Alternative and Complementary Medicine, which found that Swedish massage boosted immune function and decreased stress hormones compared to a placebo.

"There's a real consistency between their results and our results," Rapaport says. "I was amazed at how positive their results were based on a really brief intervention."