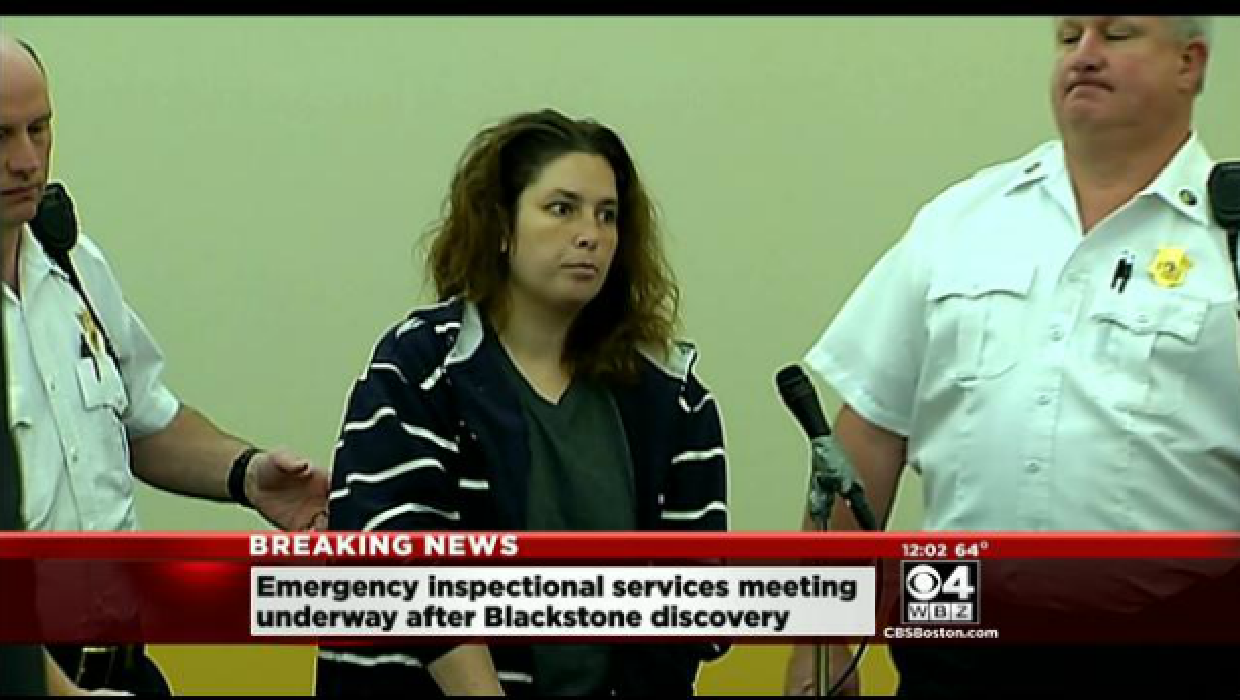 BLACKSTONE, Mass. - A woman who lived at a squalid, vermin-infested home where the bodies of three infants were found this week was arraigned Friday on charges including fetal death concealment and ordered held without bail as the search for more possible bodies continued.

Detectives investigating a case of reckless endangerment of children found the bodies at a house in Blackstone, about 50 miles southwest of Boston, littered with soiled diapers. Four other children had been removed from the home two weeks earlier.

Erika Murray, 31, was arrested Thursday night on charges including fetal death concealment, witness intimidation and permitting substantial injury to a child. Not guilty pleas were entered Friday on her behalf.

Her attorney, Keith Halpern, suggested that Murray was mentally ill.

"You want answers in circumstances like this. ... Mental illness doesn't always provide those kinds of answers," Halpern said after Murray's arraignment. He did not elaborate on her condition.

Murray was the mother of the two oldest children removed from the home last month, but no birth records existed for the two youngest, police said.

The children first came to the attention of police two weeks ago after a 10-year-old boy who lived in the house went to a neighbor's home and asked, "How do you get a baby to stop crying?" said Tim Connolly, a spokesman for Worcester District Attorney Joseph Early Jr.

The neighbor went with the boy and found the crying baby covered in feces.

Detectives found the body of an infant in a closet on Wednesday and the remains of what appeared to be two other newborns on Thursday, police said. The prosecutor's office said a medical examiner will determine whether they were newborns or fetuses.

Early said Friday that authorities had not ruled out the possibility that more bodies may be inside. The search of the home, a couple hundred feet from the town's police station, is expected to take several days.

The four other children, ages 13, 10, 3 and 6 months old, were removed from the house on Aug. 28, authorities said. They were placed in the custody of the state Department of Children and Families.

Gov. Deval Patrick, who was briefed on events, said the state acted quickly after receiving information from police about what he called a "horrible situation" in the home.

"The more you read about, the more I hear about it, the more upsetting it becomes," he said.

The department said in a statement that it did not previously have an open case involving the family and that it learned about the situation through a report of possible abuse or neglect.

The judge in Uxbridge District Court agreed to a request by a prosecutor to seal a file concerning a previous court appearance by Murray on the reckless endangerment charges related to the two youngest children taken from the home.

A man also was living in the house, but he has not been charged, Connolly said.

Investigators wore hazardous material suits as they worked Friday in the small house, which has been condemned by health officials. Police said skeletal remains of several animals, including cats and a dog, also were found inside.

Diane Densmore, who lives a few doors down, said she and her fiance often walked by on their way to the grocery store and were struck by how the windows were always closed and the shades drawn. She said there were no fans in the windows even on the hottest days.

Densmore said she spoke with a woman at the house only once, but she at times saw people outside the house clearing the yard. "It's unbelievable this happened right underneath our noses," she said.

A mail carrier, Pam Webster, said she knew it was a dirty home and she often saw children eating breakfast on the porch. She said she typically handed the mail directly to a woman at the house.

Marilynn Soucy, 68, who lives a few doors down, said she and her husband rarely saw the couple, who she said lived in the house for at least three years, or the children.

Soucy said she never heard any major complaints about the couple, other than her grandchildren once saying that the house smelled bad.

"If we thought kids were being abused or living in squalor we would have said something," she said.