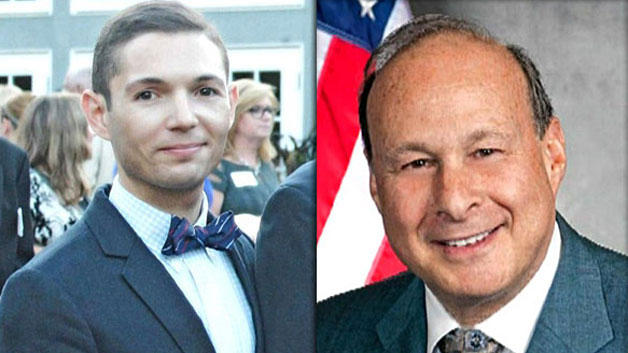 BOSTON -- The Democratic leader of the Massachusetts Senate said Thursday he supports an independent investigation into allegations that his husband sexually assaulted and harassed several men, including some with business before the Legislature.

Senate President Stan Rosenberg, in a statement, also promised to recuse himself from any matters related to the investigation or the allegations reported by The Boston Globe.

The newspaper said it spoke with four men who said Rosenberg's husband, Bryon Hefner, sexually assaulted and harassed them over the past few years. Three of the men told the Globe that Hefner grabbed their genitals and one said Hefner kissed him against his will.

The Globe said it uncovered no evidence Rosenberg knew about the alleged assaults, though in some cases, he was nearby when the incidents occurred. Rosenberg, in an earlier statement Thursday, said he had not previously been aware of allegations against his husband.

Republican Gov. Charlie Baker called for an immediate investigation by the Senate.

"Frankly, I'm appalled by the allegations. They're disturbing. They're distressing. And I really felt for the people when I read the story who came forward," Baker told reporters. "It's really important for the Senate as soon as possible to conduct a thorough investigation into these allegations."

Baker said any investigation must ensure those who come forward are protected against retribution.

Rosenberg gave no indication if he planned to step aside from the key leadership post he has held since 2015. He said he had authorized Majority Leader Harriette Chandler, of Worcester, the number two Democrat in the Senate, to work with Republican Leader Bruce Tarr, of Gloucester, and Senate counsel to determine how the investigation should be structured and carried out.

"While the Senate President will be recused in this matter, he will remain in the Office of the Senate President and retain his responsibilities for all other matters before the Senate," Chandler said in a statement, according to CBS Boston. "I look forward to working with the Minority Leader in the true spirit of bipartisanship to resolve this issue in a transparent and expeditious manner."

Tarr called the allegations "very serious and disturbing," adding that any wrongdoing found should be dealt with swiftly.

In a statement to the Globe through his lawyer, Hefner said he was "shocked to learn of these anonymous and hurtful allegations."

"To my knowledge, no one has complained to me or any political or governmental authority about these allegations which are now surfacing years afterward," Hefner, 30, said in the statement. "As one can imagine, it is incredibly difficult to respond to allegations by unnamed and unidentified individuals that involve an extended period of time, particularly in the current environment."

Rosenberg, 68, a state senator since 1991, assumed the top leadership post in January 2015. He is the first openly gay leader of either legislative chamber in Massachusetts.

Shortly before his election as president, Rosenberg responded to reports that Hefner, then his domestic partner, had used social media to boast of his influence in Senate affairs.

In a December 2014 letter to 33 Democratic senators, Rosenberg vowed to create a "firewall" between his personal and professional life.

In the initial statement issued by his office earlier Thursday, the Amherst Democrat said he first heard of the allegations when they were published by the Globe.

"Even though, based on what little I have been told, these allegations do not involve members or employees of the Senate and did not occur in the State House, I take them seriously," Rosenberg said. "To the best of my recollection I was not approached by anyone with complaints during or after the alleged incidents made in this article or I would have tried to intervene."

The Globe said the four men felt powerless to report the encounters because they feared alienating Rosenberg, believing Hefner had tremendous sway with the Senate leader. The paper said it granted the four men anonymity because they must still work with Rosenberg, and interact with Hefner.

One of the men, described as a policy advocate, said that in 2015 Hefner — then Rosenberg's fiancé — appeared at his door, stepped forward and grabbed his genitals and said that he and the Senate president were a team on Beacon Hill, and that they would take care of him. The man said he froze and felt powerless — recalling times when Hefner boasted of his influence with Rosenberg.

The man said he was able to overcome his shock, and asked Hefner to leave.

Rosenberg has strongly defended what he calls the Senate's "zero tolerance policy" for sexual harassment in recent weeks.

He's told reporters that he was aware of two incidents of sexual harassment since becoming the Senate leader, and that both had been resolved to the satisfaction of the victims. One, he said, involved allegations of misconduct by a legislative intern who no longer works for the Senate.

The other was a complaint by a Senate staffer directed at a person who did not work at the Statehouse.

Rosenberg and Hefner were married at a private ceremony last September after living together for several years.

Rosenberg was raised by foster parents and has said the fact that Hefner also was in the state's foster care system as a child contributed to the bond between the two men.