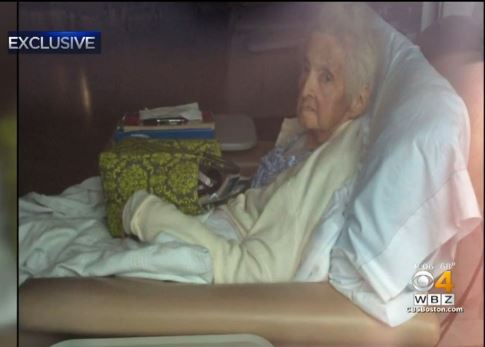 METHUEN, Mass. -- A woman somehow ended up locked inside a dialysis clinic for hours Saturday after the staff had gone home, apparently forgetting about her.

"She's shaken, but got her all cleaned up put her in bed," Pam Crosby said after getting off the phone with her mother's rehab facility. It was a welcome update about a beloved woman, 86-year old Maureen Perry, reports CBS Boston.

Hours earlier, her granddaughter, Erica Crosby, stood outside of a dialysis center and took a photo of her. The elderly woman was alone, apparently forgotten and locked inside.

"At first, I was enraged, then concerned, and then disgusted," said Erica Crosby. "I couldn't believe it."

Perry was in the Fresenius Dialysis Clinic on Merrimack Street in Methuen that closed three hours earlier. She is temporarily bedridden and at a rehab facility, to which an ambulance transports her. The rehab center alerted the family Saturday that she had yet to return.

"It's about 5:15 and we haven't heard from any place, and your grandmother isn't back yet," said Crosby about the phone call.

The ambulance company told the family the dialysis facility was locked up when its people arrived, so the family decided to drive there.

"I called 911 and I said, 'I can't believe I am about to report this, but my grandmother is locked in the dialysis center,'" said Crosby.

Crosby is a nurse and cannot wrap her head around someone forgetting her grandmother.

"I am in healthcare and this is disgusting, absolutely disgusting," said Crosby. "Someone needs to be held accountable for this. This is absolutely not okay."

"Our patients' care and safety are our top priorities. This is an issue of great concern and we are looking into the matter," a company spokesman said.