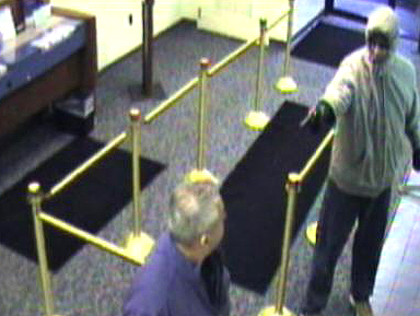 (CBS/WBZ) BOSTON - A man caught in the middle of a bank robbery says he doesn't know what he was thinking when he told the robber "no."

Robert Wood was inside the Eastern Bank in Peabody, Mass., a Boston suburb, when a bandit stuck a gun in his face and demanded money. At first, the 61-year-old didn't take the threat seriously, thinking it was a practical joke, according to CBS affiliate WBZ.

"When he shoved me I realized something was going on, then when I saw the gun..." says Wood. "He says 'I'll shoot you,'" Wood told WBZ.

But that still wasn't enough to make him back down.

"He threw his bag at me and said put your money in the bag and I threw the bag back at him."

The robber turned his attention to the tellers, and Wood jokes that it was probably for good reason.

"I got a good look at him. I think if he had his glasses off he would have had fear in his eyes," he told the station.

Wood's wife wasn't laughing, though. "She says 'I could have been a widower, she says you never take anything serious.' I said that's my nature."

The suspect, 47-year-old Mark Lepage was later arrested and charged with armed robbery.