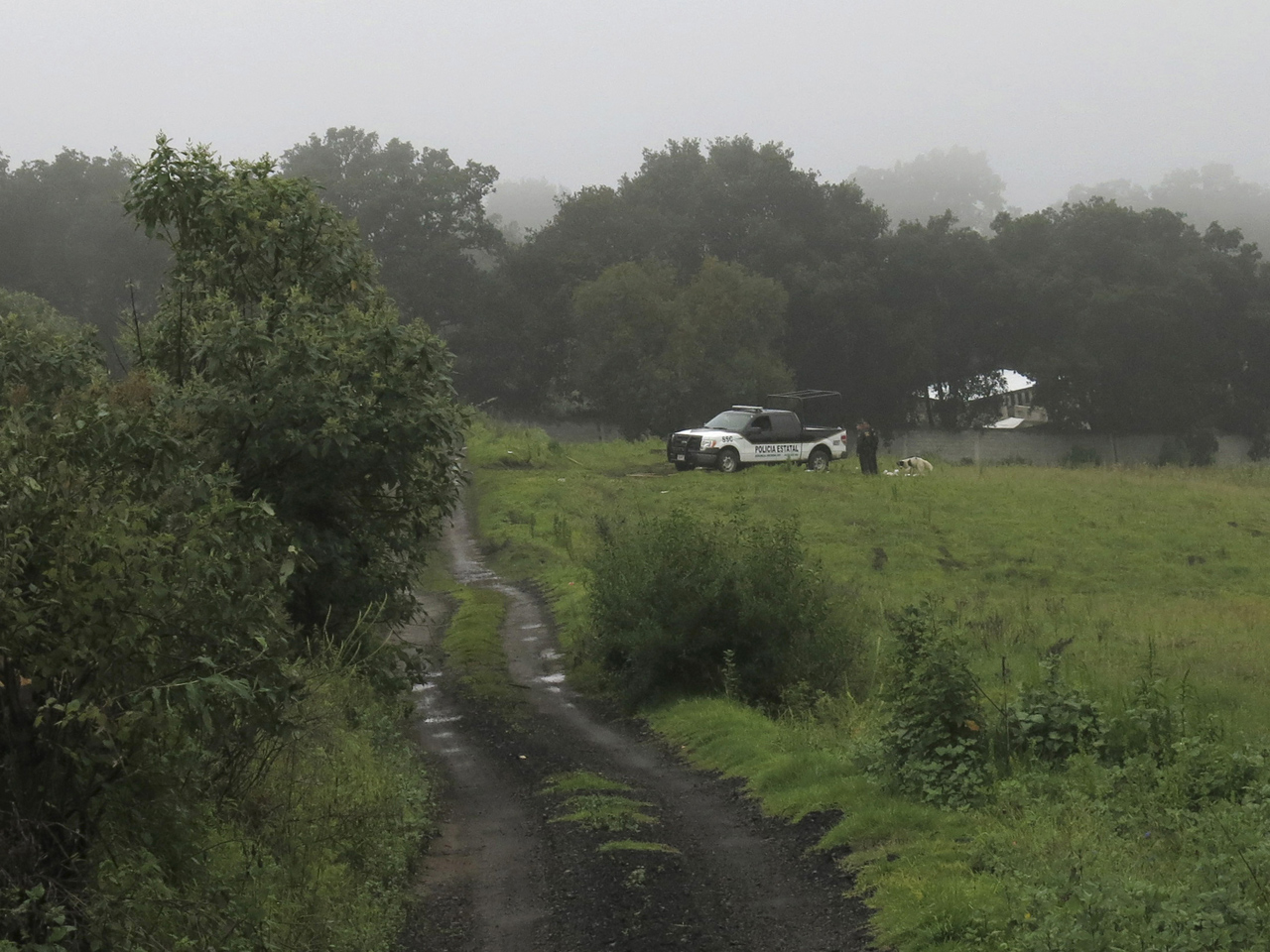 TLALMANALCO, Mexico The bodies were headless and covered in lime and asbestos, hidden under a thick concrete slab — young men and women not seen since they went out partying in an upscale area of Mexico's capital nearly three months ago.

As the families of 12 missing youths settled in Saturday for an anguished wait for DNA identification, they and others said this week's gruesome discovery at a muddy mass grave in the countryside east of Mexico City was bitter vindication for those who have said all along that the city's top law-enforcement officials downplayed the disappearances and were at best incompetent in trying to find their loved ones.

The bodies were only found once federal investigators stepped in — after waiting impatiently for local police to make progress.

The kidnapping and murder has revealed a gangland battle for control of the lucrative drug trade in the poshest bars and nightclubs of a megalopolis that had been an oasis of calm during Mexico's nearly seven-year drug war. The head of Mexico City police on Saturday deployed more officers and a helicopter to some of the city's upscale districts along with the rough neighborhood of Tepito where most of the victims lived, fearing retaliatory attacks.

A federal official who helped discover the bodies said that they were found separately from their heads in what could be a frightening echo of the brutal mutilations of drug cartel victims in other parts of Mexico. The official spoke condition of anonymity because he was not authorized to discuss the ongoing investigation.

"Mexico City is not a bubble. If we don't put a stop to it, we're going to fall into a serious security problem," said Miguel Amelio Gomez, a security consultant and former investigative police chief for Mexico City's attorney-general.

The kidnapping occurred three months ago midday on a sunny Sunday in an upscale district in the heart of Mexico City, five cars pulled up outside the after-hours club known as Heaven, a block from federal police administrative offices and the U.S. Embassy. Eight men and four women who had been partying all night left and climbed inside, grainy surveillance video shows.

Mexico City police said they were working on the case. But after more than two months of little progress, federal investigators were brought in. They discovered 13 bodies, apparently the 12 young victims and an unidentified person, on Aug. 16 on a ranch 35 miles from where they disappeared. Tattoos and dental work identified at least five of the victims from the Heaven club. Work to identify the rest continued Saturday, and families pleaded for the remains to also be examined by forensic experts abroad arguing they can't trust their country's investigators.

Relatives of the 12 expressed grief, frustration and mistrust at the discovery. And they accused Mexico City's law-enforcement authorities of moving slowly on the sensitive investigation, perhaps because they were afraid of what it might reveal.

"It's all really confusing to us," Beatriz Loza, the aunt of victim Monserrat Loza, said Saturday. "The investigation failed. I can't believe that three months have passed."

Four current and former law-enforcement officials told The Associated Press the massacre appears to have been orchestrated by a wealthy and powerful drug gang as revenge and a warning to a group of poorer interlopers trying to seize territory in some of the city's trendiest neighborhoods.

The officials spoke on condition of anonymity because they were not authorized to reveal details of the ongoing investigation.

Investigators told the AP they believe dealers from the poor eastern neighborhood of Tepito have been trying to move in on the Union of Insurgentes, a gang that's named after the city's prosperous main north-south thoroughfare and controls sales in virtually all of the nightspots in the wealthiest parts of the city. The gang in control hires women as spies to flirt with potential rivals looking to sell drugs on their territory, and valets are used as lookouts, Gomez said. Corrupt police with annual salaries of less than $10,000 are paid to turn a blind eye.

Two owners of the Heaven bar, Mario Ledezma and Ernesto Espinosa Lobo, have been arrested. Some of the witnesses have testified that both were working with the Union of Insurgentes, according to an investigative document written by Mexico City prosecutors and shown to the AP by a person with access to the case files.

Ledezma claimed in a statement to authorities that he was threatened by armed men from the gang who informed him that they were going to sell drugs in his bars — and kill him if he objected.

Ledezma said they told him if they ever saw other people dealing in the bars they had claimed as territory, those rivals would disappear.

Of the 12 victims, at least some had family ties to a Tepito gang.

One, Jerzy Ortiz, has a father, Jorge, who is currently imprisoned for extortion, organized crime, homicide and robbery. Another victim was Said Sanchez, whose father is serving a 23-year prison sentence for similar crimes.

Mexico City Attorney-General Rodolfo Rios has said the Heaven case was also connected to a murder two days earlier in a nightclub in the trendy Condesa neighborhood, where an alleged drug dealer was taken out onto the street and shot in the head.

An official with the Mexico City prosecutor's office told the AP that investigators there are looking into whether the gang feud was behind other deadly incidents in the capital around the same time.

In one case from April, relatives of five other young men reported that loved ones had been taken from a bar called Virtual in the same area as Heaven. Relatives said that when they filed missing persons' reports authorities asked them to stay quiet for their own safety.

Surveillance camera footage that could have helped solve the mystery disappeared eight days after the kidnapping, according to the prosecutor's official, who wasn't authorized to speak about the case.

In the Heaven case, families started to report the missing the next day but nothing happened until four days later when the relatives blocked streets in a public protest. Even then the case seemed to be going slowly, with leads turning up and immediately going cold, and Mexico City officials repeatedly emphasizing that the case was no sign of a broader problem of insecurity in the capital.

"They have many elements, many people, but where are the victims?" Leticia Ponce, mother of 16-year-old Jerzy Ortiz, one of the missing, asked in July. "Are they really trying to find them?"

The break came on Aug. 16, when federal investigators were searching a suburban area east of Mexico City. Attorney-General Jesus Murillo Karam said last week that the investigators were out on a completely different case when they stumbled across the ranch. But the official with the federal prosecutor's officer told the AP that federal investigators had been assigned specifically to look for the Heaven victims in neighboring Mexico state, a sign of impatience with efforts by police in the capital.

The investigators, following informants, had heard that the kidnappers might be in rural Tlalmanalco, already known as a spot that was popular among criminal gangs. In their search, they came upon an armed man near a cemetery who took off in his truck at the sight of investigators, the federal official said.

The officers followed him onto a ranch known as La Negra, thinking perhaps they would find a "safe house," where criminals hide guns, victims or themselves. They returned several times to move on the wooded property, where they found cows, turkeys and horses, plus an unfinished shed.

They got a search warrant on Wednesday to look for weapons. When they arrived on the ranch, they found bags of clothing and a box full of cellphones.

When they started questioning two men living on the property, the men got nervous and investigators got suspicious. Under separate questioning, the two gave different stories. Finally one confessed that someone had buried bodies on the ranch and led them to the site. By Wednesday night, federal and Mexico state authorities were mounting a full-scale excavation.