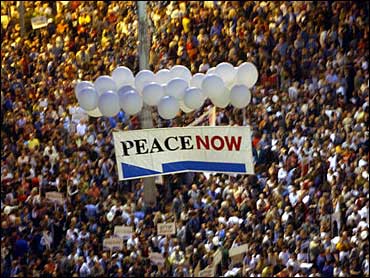 More than 100,000 Israelis rallied Saturday night in favor of a pullout from the Gaza Strip in a massive show of strength by the long dormant opposition movement.

The protest, led by the opposition Labor Party, followed a bloody week in Gaza. Israeli troops withdrew from a Palestinian refugee camp in southern Gaza early Saturday, leaving a scene of wide destruction, as Palestinians bitterly marked the 56th anniversary of Israeli's establishment.

Demonstrators packed Tel Aviv's Rabin Square, where Prime Minister Yitzhak Rabin was killed in 1995 by a Jewish extremist opposed to peace efforts, for Saturday's rally. Israeli media estimated the crowd at up to 150,000 people, one of the largest rallies by Israel's so-called peace camp since Rabin's death.

Organizers hoped the strong showing would breathe new life into the opposition and help restart peace talks with the Palestinians, which have been stalled for months.

"Exit from Gaza, begin talking," read a large poster over the main stage.

In Gaza City, Israeli helicopters fired missiles at three targets in Gaza City early Sunday, knocking out electricity in about one third of the city and causing widespread panic. At least four Palestinians were lightly wounded.

The attacks occurred minutes apart just after midnight in two residential areas of the city. Dozens of people rushed into the streets while still in their pajamas.

The blast, in a residential neighborhood, caused heavy damage to the building and shattered windows in nearby homes and cars. Israeli Apache helicopters hovered overhead as ambulances arrived on the scene.

The second strike hit a four-story building housing offices of a newspaper and research center affiliated with the militant Hamas group. One bystander was lightly wounded by shrapnel, medical workers said.

The third attack hit a transformer, knocking out power in the northern part of the city, home to about 40,000 people.

Some demonstrators in Tel Aviv held placards in support of Prime Minister Ariel Sharon, who has proposed withdrawing from the Gaza Strip, a volatile area where 7,500 Jewish settlers live among 1.3 million Palestinians.

Members of Sharon's Likud Party recently vetoed the pullout plan, although polls have shown a solid majority of Israelis favor the proposal.

"This is a protest of the majority," opposition leader Shimon Peres told the crowd in a fiery speech. "Eighty percent of our people want peace. One percent are trying to block it."

While the protest was organized weeks ago, organizers said the latest fighting in Gaza gave the rally added weight. Since Tuesday, 13 Israeli soldiers and 32 Palestinians have died, and more than 300 Palestinians have been wounded.

"I think many people decided to come out today because of the soldiers getting killed in Gaza this week," said Tal Kfir, a 26-year-old student from Tel Aviv.

Some commentators drew parallels with the popular groundswell of criticism that preceded Israel's withdrawal from southern Lebanon in 2000 after an ill-fated 18-year occupation.

"After months, the peace camp is awakening," Yossi Beilin, head of the dovish Yahad Party, told The Associated Press. "We will not let Sharon lead us by the nose."

Indeed, CBS News Correspondent Richard Roth observed, "It now appears inevitable that Israel will pull its settlers -- and the troops supporting them -- ouf of Gaza" due to public pressure and the escalating violence this week.

At an economic conference in Jordan, Secretary of State Colin Powell said Saturday the Palestinians are willing to consider an Israeli pullout from Gaza depending on how Sharon revises the plan rejected by his party.

"I think that the Palestinians want to seize this opportunity," Powell said after a 40-minute meeting with Palestinian Prime Minister Ahmed Qureia. "They want to know more about it, of course."

Islamic Jihad claimed responsibility for a pair of deadly attacks on Israeli army vehicles that sparked the week's violence.

Israeli troops left behind a trail of destruction in Rafah, where a Palestinian attack Wednesday killed five soldiers. Dozens of homes and businesses were demolished, water pipes and electric cables were destroyed. U.N. officials said more than 1,000 people were left homeless.

The Israeli military said it had to secure the area for troops retrieving body parts of the five dead soldiers. It also reported heavy "collateral damage" from exchanges of gunfire with Palestinian militants who used homes, mosques and ambulances for cover.

Also Saturday, a Palestinian man died of wounds sustained in clashes with the army earlier in the week, Gaza hospital officials said.

The withdrawal came as Palestinians marked the anniversary of Israel's establishment 56 years ago, a day known to Palestinians as "the catastrophe."

In a televised speech from the West Bank town of Ramallah, Palestinian leader Yasser Arafat urged his people to remain steadfast, sending a mixed message of defiance and readiness for peace talks.

"Find what strength you have to terrorize your enemy and the enemy of God," he said, quoting the Quran. "And if they want peace, then let's have peace."

Arafat also said the Palestinians' "hand is extended (to Israel) ... to make this peace, the peace of the brave."

At noon local time, sirens wailed throughout the West Bank and Gaza Strip to signal three minutes of silence. Thousands of Palestinians participated in marches throughout the areas. Many held large wooden keys symbolizing homes lost more than half a century ago.

Tens of thousands of Palestinians fled or were expelled during fighting ahead of Israel's independence on May 15, 1948. Although Palestinian leaders say they want an independent state in Gaza and the West Bank, several million refugees and their descendants hope to return to their properties inside Israel.

"Every Palestinian refugee looks forward to the day he will embrace his homeland," said Musa Zaqout, 66, of the Beach refugee camp in Gaza.

Israel opposes the return of Palestinian refugees, saying it would be demographic suicide. U.S. President George W. Bush recently backed the Israeli position, saying refugees would have to settle in a future Palestinian state.

"It is a sacred right for each refugee to return to his homeland," Arafat said.