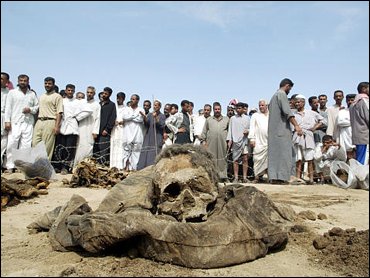 People digging at a mass grave in southern Iraq said Wednesday there are more human remains in the ground besides the 3,000 that have already been unearthed.

The remains are believed to be of people killed during a 1991 Shiite revolt.

By every indication, the mass grave in Hillah, 60 miles south of Baghdad, is the largest found in Iraq since U.S. forces overthrew the government last month.

Hundreds of people from nearby towns and villages watched from behind a barbed-wire barrier as sets of remains were pulled from the field near Hillah and set aside wrapped in plastic bags, sheets and blankets. Some of the bodies' skulls still had tufts of long hair, and officials said they probably were women.

Many of the onlookers were weeping, and some chanted: "There is no God but God, and the Baath (Party) is the enemy of God." Several women were holding pictures of their missing men.

Rafed Husseini, a doctor leading the group of local men doing the digging, said a total of 3,000 bodies had either been retrieved or located in the past nine days. About half remain unidentified while the rest have been identified mainly through documents found on the bodies, Husseini said.

The excavation Wednesday came two days after Iraqis pulled bodies from a newly discovered mass grave near Basra, the country's second-largest city. That site in southern Iraq was believed to contain remains of up to 150 Shiite Muslims killed by Saddam's regime after a rebellion in 1999.

Villagers from the nearby town of Mahawee first organized the dig by bringing in a bulldozer to open up the site.

"We are organizing it and we are digging," said Abuzaid Dinar, the village headman. He said his dead father and brother were buried somewhere in the area, where several separate mass graves were spread out over about a half-mile-square area.

Human rights groups say they believe Iraq is dotted with mass graves, many filled with victims of Saddam's brutal excesses. Villagers said that appeared to be the case with the latest site.

"About 20 percent of them were buried alive, because they had no bullet wounds, but their hands were tied and they were blindfolded," said Ameer Shumri, an official from the governor's office in Hillah.

Shiites rose up against Saddam after the 1991 Gulf War but were crushed by the Iraqi leader and his police and military apparatus. Thousands of Shiites were killed.

Many Shiites had expected more U.S. help in their revolt. Some have expressed bitterness, saying the United States under former President Bush had not intervened to save them from Saddam's wrath.

U.S. Marines, who arrived earlier Wednesday to secure the site, planned to bring water and camouflage netting to protect onlookers from the blistering sun.

Peter Bouckaert, a researcher with Human Rights Watch, criticized the U.S.-led administration in Iraq for not sending any forensic experts to Hillah and for allowing local people to excavate the graves.

"The way they're doing it is, they are destroying evidence," Bouckaert said at the scene Wednesday. "It's an absolutely shameful failure on the part of the U.S. government."

He said at least 200,000 people had disappeared in Iraq during the past decade, and that human rights groups knew the locations of many other mass grave sites throughout the country.