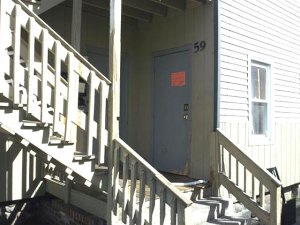 (CBS) LAWRENCE, Mass. - While she was rocking her granddaughter to sleep on her front porch on Saturday night, Nelida Lozada was shot in the back, according to CBS Boston.

She had been on the front porch of her north suburban Boston home with her granddaughter when, around 10:30 p.m., a man with a gun ran up to Lozada and began shooting.

"She was just sitting there rocking the baby and some guy just came up and shot at her," the victim's daughter told CBS Boston.

Lozada immediately covered the baby and ran back inside the house. As she tried to escape the gunfire, she was also shot in the shoulder, her daughter told the station.

The gunman then ran off; the child was not hurt.

After being treated at a local hospital, the grandmother was released.

There have been no arrests, but investigators are looking into possible gang activity.

According to the station, recent reports of crime in the neighborhood have including a stabbing, vandalism, and a shooting back on Christmas morning.