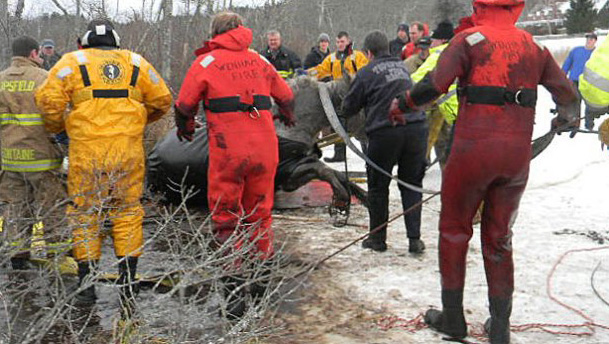 HAMILTON, Mass. – It took several people, but they were able to save an 1,800-pound horse from a tragic end, CBS Boston reports.

The horse, named Moonshine, fell through the ice at Devon Glen Farm on Bay Road in the North Shore town of Hamilton around 12:30 p.m. Saturday.


When Hamilton firefighters got there, they found the horse in the mud up to her neck.

Several other local firefighters were called in to help get her out.

A tree service company also provided a crane and a large wrecker was brought in from a towing company for the rescue.

"It took about 2 1/2 hours. We were finally able to get straps under (her) and enough mud dug out around (her) that with great human effort and Moonshine’s effort as well, (she) was pulled out of the hole and (she) walked away,” Hamilton Deputy Fire Chief Kirby Brand told WBZ NewsRadio 1030.

She was brought to a heated barn and given warm IV fluids.