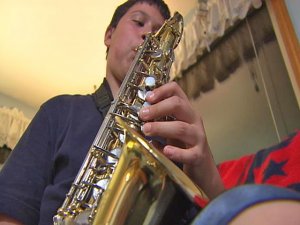 (CBS/WBZ) RAYNHAM, Mass. - Think back to your school days, if you can, and remember those dedicated kids who lugged their musical instruments onto the bus - not just flutes and clarinets, but trombones, or even the occasional tuba.

Andrew DiMarzio wants to be one of those kids, but his school district south of Boston says it's too dangerous, according to CBS affiliate WBZ.

As of Thursday morning, the 12-year-old is prohibited from bringing a saxophone on the bus to Raynham Middle School, the station reports.

Andrew's parents go to work early every morning, so the 6th grader has no choice but to take the bus. Recently, the driver said the sax can't come along. It's a decision the owner of the bus company stands behind.

"If it doesn't fit and there's no place to put it then absolutely. It becomes a safety issue," Bill Lucini, owner of Lucini Bus Line, Inc., told WBZ.

"No one wants to jeopardize someone's safety and that's what this is," Lucini continued. "We're not against music programs. I mean, we're a bus company trying to operate as safely as we can."

Andrew's mom feels like her son is being targeted. She says his bus is the only one where big instruments are forbidden.

"This is how we're teaching our kids, that some kids have to follow the rules and other kids can flaunt them," said Cathy DiMarzio. "Either everyone with these instruments can be allowed on the bus or none of them can be allowed. You're targeting one student, one bus, and that's just not right."

The superintendent of schools and the chairwoman of the school committee both are on the record, saying they wish they could help but they can't figure out what a solution to this problem would be.

"I just want to see them let me on the bus with the instrument," says 12-year-old Andrew.

Maybe you've got a solution?