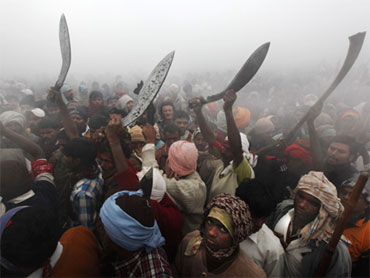 The ceremony began with prayers in a temple by tens of thousands of Hindus before dawn Tuesday. Then it shifted to a nearby corral, where in the cold morning mist, scores of butchers wielding curved swords began slaughtering buffalo calves by hacking off their heads.

Over two days, 200,000 buffaloes, goats, chickens and pigeons will be killed as part of a blood-soaked festival held every five years to honour Gadhimai, a Hindu goddess of power.

While cows are sacred and protected by law in Nepal, animal sacrifice has a long history in this overwhelmingly Hindu country and parts of neighbouring India. The Bariyapur festival has become so big, in part, because such ceremonies have been banned in many areas in the neighboring Indian state of Bihar.

And while it is criticized by animal-rights protesters, the festival is defended as a centuries-old tradition.

Many Nepalis believe that sacrifices in Gadhimai's honour will bring them prosperity. They also believe that by eating the meat, which is taken back to their villages and consumed during feasts, they will be protected from evil.

Taranath Gautam, the top government official in the area, estimated that more than 200,000 people had come for the ceremony in Bariyapur, some 60 miles from Kathmandu. Some brought their own animals to sacrifice.

"I am here with my mother who had promised the goddess she would sacrifice a goat. It was her wish and promise, and I am glad we were able to fulfill it," said Pramod Das, a farmer from the nearby village of Sarlahi. "I believe now my mother's wishes will come true."

Animal rights groups don't have much power in Nepal, but they have staged repeated protests in recent weeks. Local news reports say some activists set up stands in towns on the way to the Bariyapur temple, offering Hindu pilgrims coconuts and other fruits to sacrifice instead of animals.

"We were unable to stop the animal sacrifices this year, but we will continue our campaign to stop killings during this festival," said Pramada Shah of the group Animals Nepal.

The ceremony, which goes back for generations, has enormous resonance in a country where per capital income is about $25 a month, illiteracy is widespread and vast social divides have left millions working as tenant farmers for feudal landlords.

Even many educated Nepalis see value in the tradition.

Om Prasad, a banker from the nearby city of Birgunj, brought offerings of fruit and flowers to the festival, but said he believed people should be able to sacrifice animals if they want.

"It is their tradition, and it is fine if they continue to follow it. No one should try to tell them they can't follow what their ancestors did," he said.

Experts say it will take many more years before there are changes in these deeply rooted traditions.

"They continue these animal sacrifice rituals because they believe it is a tradition that can't be broken," said Ram Bahadur Chetri, an anthropology professor at Kathmandu's Tribhuwan University. "The people who follow these traditions believe that if they discontinue, then the gods will get angry and there could be catastrophe in the country."

Buffaloes, goats, chicken and ducks are sacrificed at most Hindu homes in Nepal during the Dasain festivals, which fell in September this year.