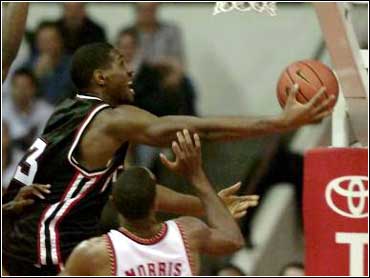 Early in the second half, Gary Williams acknowledged the pressure of the situation by peeling off his sweat-soaked suit jacket. Not long after that, Maryland's fiery coach couldn't repress a recurring image.

"It was one of those games when the thought goes through your head that we're not going to win," he said.

Fortunately for the No. 25 Terrapins, Lonny Baxter scored a career-high 31 points and led a furious comeback as Maryland overcame a 12-point deficit in the final seven minutes to beat North Carolina State 78-73 on Sunday.

Juan Dixon added 17 points for the Terrapins (16-6, 5-4 Atlantic Coast Conference), who scored the game's final 10 points after trailing 73-68 with 2:59 left. Maryland has won 11 straight at home against the Wolfpack, but this was by far the most difficult.

"It was incredible," said Williams, who choked up during his postgame news conference when talking about Baxter, who was 14-for-22 from the field.

"When he came here and they were saying our recruiting was crap. He may turn out to be the best to play here," Williams said. "I love to watch that kind of thing happen."

"We've battled on the road. It's not like we're just stinking up the joint," NC State coach Herb Sendek said. "Our guys have fought tooth-and-nail against some great teams on the road."

Baxter made a three-point play and Terence Morris sank two free throws. After a basket by NC State, the Wolfpack's Damon Thornton was called for his fifth foul on a charge and received a technical, too. Juan Dixon made the two foul shots, then scored from the baseline to make it 73-72 with 2:33 left.

Asked to comment on the call, an obviously distraught Sendek said, "You know I can't talk about that. Why even ask the question?"

Said Baxter: "That changed the tempo of the game."

After Grundy missed two free throws, a short hook by Baxter with 1:15 left gave Maryland its first lead since 2-0. Baxter then hit a layup with 40 seconds left for a 76-73 lead, and the Wolfpack's last gasp failed when Marshall Williams fired up an air-ball from 3-point range.

"Lonny Baxter was sensational," Sendek said. "Obviously, we did not have an answer for him."

NC State, looking for its first win in Cole Field House since 1989, tried something different by donning black road uniforms in place of its traditional red and white garb. The new-look Wolfpack bolted to a 22-5 lead and appeared poised to hand Maryland only its third home loss in 28 games, but the Terrapins wouldn't let it happen.

"Coach said with 3:30 left that if we shut them down, we win this game. Those were his exact words," Dixon said. "We shut them down the last three minutes. That's how we got the win."

Gainey was 6-for-9 from the field, including 4-for-5 from 3-point range, and made all five of his free throws. Thornton had 12 points and 11 rebounds.

Maryland point guard Steve Blake started on the bench because of a sore ankle, but coach Gary Williams quickly ushered him into the lineup after the Terrapins fell behind 8-2 with just over two minutes gone. Blake had little immediate effect, as the Wolfpack added three baskets to go up 15-2 on the strength of 6-for-6 shooting.

Roof is arguing he was mentally ill when he represented himself at his capital trial.