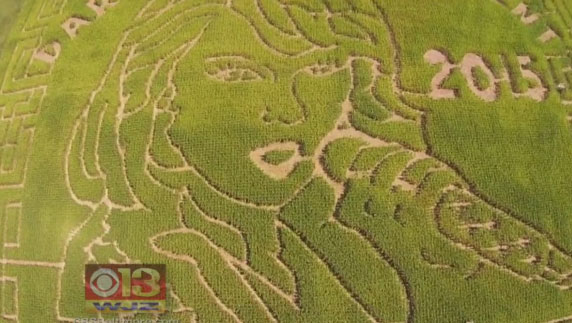 FREDERICK COUNTY, Md. -- Grammy-award winning singer Taylor Swift is not a newcomer when it comes to honors, but her most recent honor is probably a first.

Jeff Greenwood, the owner of the farm, says they chose Taylor because she is a role model and she inspires her fans to be unique.

"We chose Taylor Swift because we feel she represents great people. She's a good, honest person. She treats people amazingly and that's what we are all about," said Greenwood to CBS Baltimore.

Above Taylor Swift's face are the words, "Dare to be different."

"We thought going with `Dare to be different' 'cause that's what she is," he said.

And apparently, Taylor likes the idea. She instagramed a photo of the maze with the caption, "Lawn goals."

Now some fans are hoping Taylor decides to take a visit to the maze.