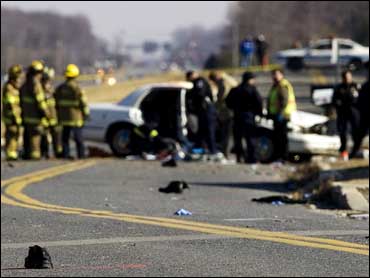 A car plowed into a crowd that had gathered to watch a drag race on a suburban road early Saturday, killing eight people and injuring at least five, police said.

Seven people died at the scene. Police say the eighth died at a hospital.

A witness said two cars in the illegal street race sped past just before a car without its lights on came up behind the crowd of about 50.

"There were just bodies everywhere; it was horrible," said Crystal Gaines, 27, whose father was among the dead.

Gaines said she grabbed her child but could not help her father, William Gaines Sr., 61.

"He wasn't breathing, he wasn't moving," she said. "His body was in pieces."

A white sedan hit people standing on the side of Route 210 around 3:40 a.m., Prince George's County Police Cpl. Clinton Copeland said, but it was not clear whether that was one of the cars involved in the race. A tractor-trailer that came by shortly afterward may also have struck someone on the road as it tried to avoid the crash, he said.

"It's probably one of the worst scenes I've seen," Copeland said. "This is a situation that could have been avoided, and it's a very tragic situation."

Residents who live near the Maryland highway where eight street-racing fans were killed have long complained about reckless driving and street racing, a local community leader said Sunday.

Street racing has been a known problem for 20 or more years on the highway, also known as Route 210, said Stan Fetter, president of the Indian Head Highway Area Action Council.

The identities of the other two have not yet been confirmed, Cpl. Arvel Lewis said. Two of the injured are in serious condition, but Lewis said he did not have updates on the others.

Police are still hoping to interview more witnesses and are urging anyone who was at the scene to come forward. But they are not actively looking for the drivers who were taking part in the illegal race because they were not directly involved in the crash, Lewis said.

"I'm sorry this had to happen -- for somebody to be driving a car so fast and not think to hit the brakes," Gaines said.

Hours after the accident on the divided highway in Accokeek, bodies covered in white sheets were scattered along what police were calling a 200-yard crime scene. Some were in the road, while others were on the shoulder.

The sedan came to a rest on an embankment about 150 feet from where the crowd had been. It had a crumpled front and hood, and the roof had partially collapsed.

The driver of the white sedan had been interviewed and did not appear to be seriously hurt, but a passenger was among the dead, Police Capt. Donald Frick said.

Authorities were working to identify the victims by showing digital photos of them to bystanders who said loved ones had been hurt. John Courtney said after viewing one of the images that his brother, Mark, 33, was among the dead.

"He liked going to the race track, watching races," Courtney said. "It's going to take a toll on my family for a long time."

Route 210 has two lanes in each direction and traffic lights about every 150 to 200 yards in Accokeek, about 20 miles south of Washington. In that area, the road is flanked by some businesses but has little traffic in the early hours, Copeland said.

Frick said it's common in the summer for police to deal with reports of motorcycles racing on the highway, which is relatively smooth with long straightaways, but he said they have not had as much of an issue with cars.

Marion Neal feared her brother also was among the dead and was awaiting images from the police.