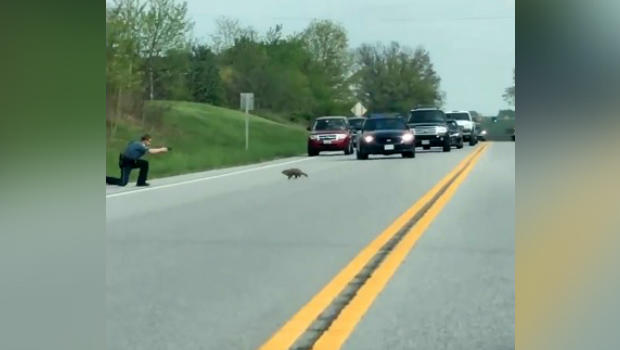 SYKESVILLE, Md. -- A video posted to social media shows a Maryland deputy shoot a groundhog as it was trying to cross a road. CBS Baltimore reports the Carroll County Sheriff's Office deputy was on Old Liberty Rd., near White Rock Rd., when he saw traffic backed up.

A groundhog was walking into the roadway, "causing vehicles to stop and creating a hazard," the sheriff's office said.

"Believing the groundhog to be either sick or injured," the deputy shot the groundhog, and "put the animal down for the public's safety," the sheriff's office said.

The woman who posted the video to Facebook says she was shocked and "did not think that it would take this turn." But she also said she was "sure the officer did the best thing in this situation."

"The deputy was travelling on Rt 26 in the area of White Rock Road when he observed traffic backing up along the road. He found that the groundhog in question was walking into the roadway, causing vehicles to stop and creating a hazard. He got out of his vehicle to assess, and as he tried to direct the groundhog off of the roadway, he realized that it was not responding as expected for an animal that was not being cornered or trapped. Believing the groundhog to be either sick or injured, the deputy then put the animal down for the public's safety."