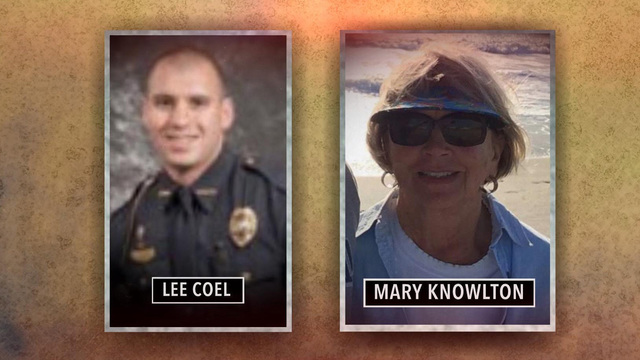 PUNTA GORDA - The Punta Gorda man whose wife was shot and killed by a police officer during a training exercise is speaking about the moment that left him stunned in disbelief.

“I just can’t believe she’s gone, but I have to learn to live with that,” Gary Knowlton, Mary Knowlton’s husband, told CBS Miami.

Gary and Mary met in high school, had two sons and were married for 55 years.

“She volunteered to be the victim in this mock shooting. I was standing 10 feet away from her when the guy shot her,” said Knowlton.

Punta Gorda police have identifiedthe officer as Lee Coel. Mary was rushed to the hospital where she was pronounced dead.

“I think they didn’t want to tell me right away, shell shocked. So when I got down there they finally told me that she was dead,” said Gary Knowlton.

Before working for Punta Gorda, Officer Coel’s personnel file shows he worked for the Miramar Police Department from February 2012 through April 2013. While there, two people accused him of using excessive force.

Miramar police say one incident, which took place in April of 2013, was captured on surveillance video. They say Officer Coel is seen dragging a suspect feet-first from the back of his police unit. The suspect landed on the asphalt.

According to documents obtained by CBS Miami, internal affairs investigated that incident as well as another complaint. A couple of weeks later, Officer Coel was forced to resign. Eleven months later he was hired by the Punta Gorda Police Department.

Gary Knowlton says he’s following his wife’s example of faith to forgive instead of focusing on blame and anger.

“I think it’s a whole series of errors. I can’t control that stuff and I know there was no ill intent, just mistakes,” he said.

The Florida Department of Law Enforcement is investigating the shooting.