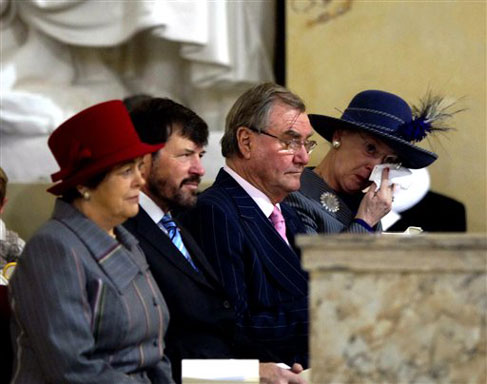 Talk about pressure. The president of your native country chats with you before the game. About 100 family members, friends and fans fly in from Central America to see you pitch. Just about everyone else in your homeland is stationed by their TV sets and radios.

They all wanted to see Dennis Martinez become the winningest Latin American pitcher in major-league history. They'll have to wait a few days longer.

Martinez, who tied Juan Marichal's record last week by winning his 243rd game, was knocked out in the fifth inning and the Boston Red Sox went on to beat the Atlanta Braves 9-3 Tuesday night.

"I was a little bit nervous before the game," said Martinez, who gave up nine hits and seven runs in four-plus innings. "There was a lot of excitement, a lot of anxiety to get it over with."

The 43-year-old "El Presidente" was cheered on by the president from his native Nicaragua, Arnoldo Aleman, who met with Martinez before the game and confidently predicted he would break Marichal's record.

Not on this night.

Aleman watched with disappointment from a Turner Field luxury box as Martinez's prospects of going past Marichal, a Hall of Famer from the Dominican Republic, ended when Boston broke a 1-1 tie with a five-run fourth inning.

The loss wasn't entirely Martinez's fault. Two Atlanta errors led to four unearned runs, and the inning was extended by a questionable call at first base. But Martinez contributed, too, giving up four hits and a walk.

"I'll have to live with it," he said. "It's not going to go your way all the time. I've been in this game a long time. I've seen the good and the bad. This doesn't surprise me."

When the Red Sox began the fifth with back-to-back singles, Atlanta manager Bobby Cox strolled to the mound to make a pitching change. Martinez willingly gave up the ball and, in trademark fashion, sprinted to the dugout to muted applause from the crowd of 43,121.

one year before teammate Andruw Jones was born. Marichal, who was elected to the Hall of Fame in 1983, had a 243-142 record in a 16-season career, mostly with the San Francisco Giants.

It was the first bad performance by Martinez in more than a month. In 12 previous outings since April 24, he was 1-0 with a save and a 1.11 ERA, allowing only four earned runs in 32 1-3 innings.

Martinez fell behind 1-0 in the first when Darren Bragg tripled and scored on Nomar Garciaparra's single.

The right-hander cruised through the second and third innings, giving up only a single, while his teammates tied it up on consecutive two-out doubles by Javy Lopez and Andruw Jones in the second.

But things unraveled for Martinez and Atlanta in the fourth. Mo Vaughn ed off with a single, then the Braves tried to turn a 5-4-3 double play on Troy O'Leary. Television replays appeared to show the relay throw barely beating O'Leary's lunge for the bag, but umpire Randy Marsh called him safe.

The Red Sox then loaded the bases on a single by John Valentin and a walk to Scott Hatteberg. Mike Benjamin followed with a high bouncer up the middle, but the ball skipped off the glove of second baseman Tony Graffanino for an error, allowing two runs to score.

Martinez struck out counterpart Bret Saberhagen for the second out, but Darren Lewis and Darren Bragg followed with run-scoring singles. On Bragg's hit, Andruw Jones overran the ball in center for the first error by a Braves outfielder this season, allowing Lewis to score all the way from first.

Martinez was making his third start since John Smoltz went on the disabled list. Smoltz is beginning a minor-league rehabilitation assignment and hopes to return to the Braves late next week.

With two off days in the next six days, Martinez may be shut out of another start before Smoltz returns. If not, Martinez will return to the bullpen, where he picked up one of his wins this season.

"If that's where they want me to go after this one, I'll be ready," he said. "Maybe I'll get a win from the bullpen next time."

Saberhagen (8-3) allowed seven hits in seven innings to win his third straight decision. His seven strikeouts were the most in a game since July 29, 1995, when he pitched for the New York Mets.

"I'd like to see him get the record," Saberhagen said of Martinez. "But I didn't want to see him do it tonight. It's not over for him. Some people have written him off, but I'm glad to see him doing well. I hope he makes it."

The Red Sox, beating the Braves for the first time in five interleague games, bounced back strongly from blowing a five-run lead in the ninth inning for a 7-6 loss Monday night. That was the greatest ninth-inning comeback by the Braves since July 5, 1978.

"This win was an important one under those circumstances," Saberhagen said. "A lot of guys had nightmares after that one."

Notes: Atlanta manager Bobby Cox is planning a closer-by-committee setup for a few games to give Mark Wohlers a chance to break out of his slump with less pressure. Wohlers surrendered a run in the eighth inning and has given up six hits, seven earned runs and eight walks in 6 2-3 innings since coming off the disabled list May 24. ... Smoltz, who has been on the disabled list for 2 ½ weeks with a sore elbow, will make a three-inning rehabilitation start Wednesday for Double-A Greenville, followed by a start with Class A Macon on Sunday.