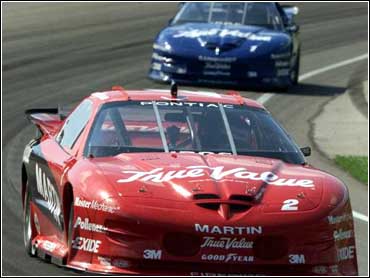 Despite winning the Indianapolis round of the International Race of Champions series for the third consecutive year, Martin again failed to beat fellow NASCAR Winston Cup star Dale Earnhardt for the championship.

In a near-replay of last year's finale of the four-race all-star series, Martin led the most laps, won the race, earned the maximum 26 points and came up just short of the title.

Last year, Martin lost to Earnhardt by one point. It was three points this time.

With that edge, the seven-time Winston Cup champion joined Martin as the IROC record-holder with four titles.

But this one was really closer than in 1999.

Earnhardt only had to finish eighth or better a year ago to assure his title. This time, it was second or better.

Martin was a third of a lap ahead of Earnhardt on the final trip around the 2 1/2-mile Indianapolis Motor Speedway oval, with Earnhardt busy holding off Tony Stewart for the runner-up spot.

Twice on the last lap, Stewart made moves to pass, but Earnhardt was able to hold him off. Had Stewart managed to get by, Earnhardt would have tied with Martin at 71 points and lost the championship based on the first tiebreaker - results of the final race.

"Mark just kept getting better and better," Earnhardt said. "He ran a great line. I just watched and learned. I had to change my line a bit and then, `Oh, no. Here comes Stewart.'

"I knew Tony would be tough, but I figured the air off my car would push his car around a bit. We were lucky to end up second, but we did what we had to do to win the championship."

The start was in reverse order of the standings going into the race, so Earnhardt and Martin began the day at the rear of the 12-car field.

Martin quickly separated himself from Earnhardt, slicing through the field and getting all the way to second place, behind Jeff Gordon, on the seventh of 40 laps.

Moments later, Indy Racing League drivers Mark Dismore, who had started at the front and led the first six laps, and Greg Ray banged together in traffic. Dismore's car slid into the wall.

The race restarted with Gordon in the lead, but Martin took the top spot on lap nine and never relinquished it. Meanwhile, the tenacious Earnhardt slipped into econd place and stayed there the rest of the way.

Martin, who has 10 IROC victories, said, "I knew what I had to do and I got the lead as quick as I could and then just tried to stretch it so he couldn't draft.

Ray was able to change tires and continue after the accident, but eventually dropped out after 18 laps, finishing 10th. Dismore was 11th and NASCAR's Jeff Burton, whose engine failed on the first lap, was last.

Stewart finished third in the points, with Labonte fourth and Cheever fifth.