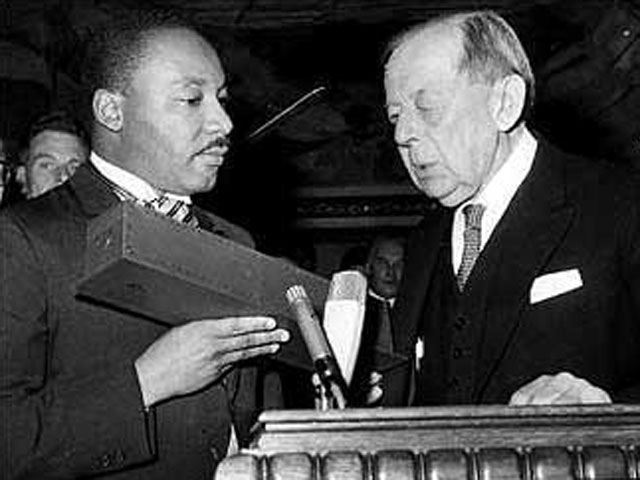 As the nation holds events honoring the Rev. Martin Luther King Jr. on Monday, a speech given by the civil rights leader in London a half century ago has come to light.

Democracy Now! reports that the speech, given by King on December 7, 1964, was recorded by a European correspondent for Pacifica Radio. The news program reports that the director for the Pacifica Radio Archives recently unearthed the audio of the address, which was delivered just days before King received the Nobel Prize in Oslo.

In the speech, King spoke passionately about the civil right struggles - and the landmark events - that had recently taken place in the United States. He took great lengths to outline significant progress -- notably more registered African-American voters, better wages and the newly signed Civil Right Act of 1964.

"We have noticed a gradual decline, and even demise, of the system of racial segregation," King declared.

But King also painted a bleak picture of oppression and intimidation that still prevailed. He referenced the recent murders of three civil rights activists who were trying to register African-Americans to vote in Mississippi.

King also drew parallels between the civil rights struggle in the U.S. with the anti-apartheid fight in South Africa.

Four days later, King would give his Nobel Peace Prize acceptance speech in Oslo, Norway - and that rare audio recording was also released by the Nobel Prize on Monday.

King, the youngest person to ever receive the prize, ended his Nobel lecture with a verse borrowed from a spiritual that he made famous on the steps of the Lincoln Memorial the previous year: "Free at last! Free at last! Thank God Almighty, we are free at last!"