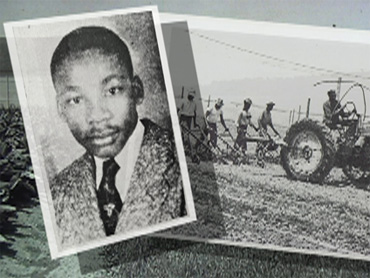 CBS News correspondent Steve Hartman reports on the influence a Connecticut town had on a young Martin Luther King Jr.

When you think of Martin Luther King Jr.'s formative years, you think may think of Atlanta, where he grew up and attended Morehouse College. You may think of Montgomery, Ala., where he got his first pastor job and led the bus boycott. But who would ever think of Simsbury, Conn.?

"It seemed like it wasn't possible that he would come to, of all places, this town," said Richard Curtiss.

Curtiss is a history teacher at Simsbury High School. Last summer he worked with a group of students who took it upon themselves to investigate this mystery.

The legend was that young Martin Luther King Jr. spent several months working in the tobacco fields. He would have been part of a group of Morehouse students who used to spend their summers in this Connecticut valley to earn money for school.

That part was common knowledge. But King?

"There is proof that he was here," said John Conard-Malley.

"I think it's one of the most amazing pieces of our town's history," Nicole Beyer added.

Conard-Malley and Beyer led the research project, which included going through books and old articles, and gathering oral history from people like 105-year-old Bernice Martin who says King went to her church in Simsbury.

They put their findings in a video. It tells the story of King's two summers in Simsbury - at the age of 15 and again at 18 - when he lived here in the dorms provided by the tobacco company.

But this is much more than just a "Washington slept here" kind of story. In a video the kids present a compelling case that these dorms not only housed him but may have also shaped him.

Conard-Malley said King was "elected the religious leader of the Morehouse students."

That leadership role had a profound effect. On his seminary application, King said that's when he decided he wanted to be a minister. But what seems to have affected him even more was Simsbury itself.

In letters written home King said, "Negros and whites go to the same church." About restaurants he wrote, "I never thought that a person of my race could eat anywhere." Most telling, he wrote about going home, "It was a bitter feeling going back to segregation. It was hard to understand why I could ride wherever I pleased on the train from New York to Washington and then had to change to a Jim Crow car at the nation's capital."

"When he came to the north I think he finally realized that hey, there is a place where, you know, they could sit anywhere they wanted in church," Beyer said.

"This is the way it's supposed to be," Conrad-Malley added.

King had a vision for what American could be. Although in the end he spoke of seeing it from a mountaintop, we now know his first glimpse was actually from a valley.