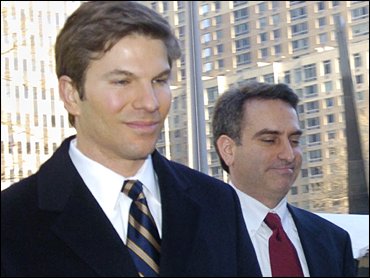 
Although he's gotten relatively little media coverage compared to his iconic former client, Peter Bacanovic has as much or more at stake than Martha Stewart in their stock trial now winding down in federal court in lower Manhattan. Unlike Stewart, Bacanovic doesn't have a few hundred million dollars to fall back upon should the trial turn out poorly. Unlike Stewart, he faces five criminal charges, including a perjury charge, and cannot separate himself as easily from the government's star witness, Douglas Faneuil, as can Stewart herself.

As far as I can tell, no celebrities have come to visit Bacanovic in court. (On Monday actor Brian Dennehy was the latest in a string of personalities who have showed up during the trial to support Stewart during her days of need.) As near as I can tell, there is no Web site dedicated to his defense. And I've yet to see a "Save Peter" placard in front of the courthouse. In short, if anyone is going to be convicted in this odd criminal case, it's likely to be Bacanovic, the relatively young man with the once-bright future.

That's why Bacanovic's attorney, Richard M. Strassberg, came out firing Monday afternoon during the first closing argument for the defense. (Martha's attorneys get their turn Tuesday morning.) Strassberg told jurors that his client wasn't stupid enough to peddle away his hard-fought credibility and reputation in order to save his most famous client a tiny percentage of her net worth. And then he launched into an attack on the reliability, credibility, accuracy and, well, sanity of Douglas Faneuil, the government's star witness, whom Strassberg labeled as a "kid who imagines bad intentions in every person he deals with ... who sees conspiracies everywhere."

Faneuil is Bacanovic's former assistant at Merrill Lynch and the fellow whom prosecutors believe adequately links together their case against both defendants. It is Faneuil, the government contends, whose testimony proves that Stewart and Bacanovic lied about why Stewart sold her shares of Imclone stock on December 27, 2001, one day before official word came down that the company's cancer treatment drug would not be approved by the Federal Drug Administration. It is Faneuil, prosecutors say, who acted as a link that day between Stewart and ImClone founder Sam Waksal, a link that Stewart and Bacanovic later tried to deny.

In fact, Strassberg focused so intently and exclusively upon Faneuil during his summation that you might have thought that it is Faneuil, not Bacanovic, who is on trial for conspiracy, obstruction of justice, perjury and lying to investigators. Faneuil's stories make "no sense," Strassberg said, because "time and time again" he "embellishes and exaggerates" the facts. "You can't trust him," Bacanovic's attorney said, because when Faneuil wasn't assuming the worst in the two defendants he was just plain unaware of what was actually going on between famous client and eager broker. After failing to land any solid blows against Faneuil during cross-examination a few weeks ago, Strassberg resorted on Monday to telling jurors that Faneuil is simply "not worthy" of their belief.

So, for example, after prosecutors told jurors in the morning session that Faneuil was in the loop about the alleged cover-up, Strassberg reminded them during the afternoon that Faneuil never participated in any conversations between Bacanovic and Stewart about Imclone. And after prosecutors told jurors that Faneuil's testimony alone proves the case against the pair — "if you believe Douglas Faneuil this trial is over," prosecutor Michael Schachter boldly claimed — Strassberg reminded the panel that Faneuil himself testified that no one ever told him to lie.

One problem for Bacanovic is that Faneuil's testimony could be far more damaging to him than it would be to Stewart. Whereas Stewart had only one relevant contact with Faneuil — a telephone conversation in which Faneuil told her that Waksal was selling his stock in the company — Faneuil and Bacanovic had plenty of relevant conversations about Stewart and the stock sale. So while Stewart's attorneys tell jurors that Faneuil was just a star-struck kid who couldn't possibly have known what the domestic diva was thinking and doing, Bacanovic has to contend with a bunch of uneasy conversations that he had with Faneuil in the wake of the sale.

Faneuil puts a sinister spin on these contacts. Bacanovic says the pair's conversations were benign. Either way, by virtue of his relationship with Faneuil, Bacanovic is far more exposed than Stewart if the jury in the end is inclined to believe Faneuil. That's why Strassberg, the lawyer, spent hour after hour Monday afternoon pitching jurors on the notion that Faneuil can't be trusted even to tie his own shoes. I kept waiting for Strassberg to get to the other parts of Bacanovic's defense, to the less personal and more cerebral reasons why the dashing young defendant deserves a break from this jury of his peers. I'm still waiting.

Simply trashing Faneuil's credibility doesn't answer all of the questions raised by the defendants' conduct. For example, Faneuil may be the biggest liar in the history of the world but that doesn't explain why Bacanovic suggested initially that Stewart sold her ImClone stock for tax purposes when it actually was sold for a profit and not a loss. (The tax purpose would have made sense only if the stock were sold at a loss.) And Faneuil may be an absolute toad of a person but that doesn't explain why Bacanovic subsequently suggested that Stewart sold her stock when it reached a pre-agreed-upon sale price of $60 when the contact between Stewart and her brokers first occurred when the stock was still a dollar or two above $60.

Tearing down the government's witness is one thing; offering a viable defense alternative is another. It is too early to say that Strassberg accomplished the first task. But he hasn't yet even tried to accomplish the second.