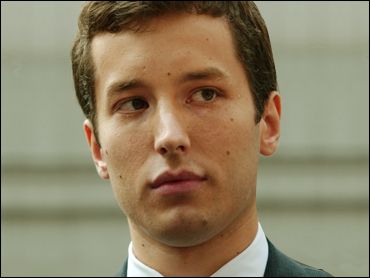 E-mails written by a former brokerage assistant testifying against Martha Stewart depict the domestic style maven as a quick-tempered customer prone to tirades.

The assistant - the star witness in the stock-fraud trial - even said Stewart once threatened to leave the brokerage because she loathed the music when she was placed on hold.

The descriptions by Douglas Faneuil came in more than seven hours of intense cross-examination by a lawyer for Stewart's stockbroker, trying to show Faneuil despised Stewart and was out to get her.

If he were, that would be of interest to Stewart's stockbroker, Peter Bacanovic, because he and Stewart - who are on trial together - insist they are innocent and have told authorities the same story about what happened on the day of the stock sale that is behind the charges they face.

Faneuil, 28, has testified that broker Bacanovic instructed him to give Stewart a tip that led her to dump ImClone Systems stock - countering Stewart's version that they already had a plan to sell the stock when it fell below $60.

On Oct. 23, 2001, after handling a call from Stewart at Merrill Lynch & Co., Faneuil told a friend: "I have never, ever been treated more rudely by a stranger in my life. She actually hung up on me!"

Three days later, he wrote to another friend: "Martha yelled at me again today, but I snapped in her face and she actually backed down! Baby put Ms. Martha in her place!!!"

Faneuil initially supported Stewart and Bacanovic's story that they had a deal to sell her ImClone shares at $60. But he changed his story in 2002, claiming Bacanovic ordered him to tell Stewart that ImClone founder Sam Waksal was dumping his shares.

Waksal had advance knowledge of a government report on an experimental drug that later sent ImClone shares on a sharp decline.

Lawyers for Bacanovic have described Faneuil as "fixated" on Stewart while he worked at the brokerage, and were using the e-mails in hopes of convincing the jury he did not like Stewart and may have been out to get her.

Bacanovic lawyer David Apfel asked Faneuil whether it was true Stewart once said "something about how bad the hold music was. She told you she was going to leave Mr. Bacanovic and leave Merrill Lynch unless the hold music was changed."

Faneuil confirmed the account. Jurors broke up in laughter.

In one e-mail to a friend, Faneuil describes Stewart - apparently thinking she was speaking with Bacanovic instead - mocking someone who answered phones at the brokerage.

"This is not a joke!" he quoted Stewart as saying, just before hanging up. "Merrill Lynch is laying off 10,000 employees because of people like that idiot!"

As the e-mails from Faneuil were flashed on a giant screen in the courtroom, Stewart maintained the stoic expression she has held throughout the two-week-old trial. She did not speak to reporters as she left court.

Jurors were left to think about the e-mails over the weekend because court was in recess Friday. The trial resumes Monday, with Stewart lawyer Robert Morvillo questioning Faneuil.

Faneuil also testified he believed he would lose his job unless he lied to cover up the true reason Stewart sold.

"I felt I would be fired if I didn't lie," Faneuil answered.

In addition to working with Bacanovic to obstruct justice by lying about the stock sale, Stewart is accused of deceiving investors in her own company, Martha Stewart Living Omnimedia.

The assistant has also testified that Bacanovic - without explicitly asking him to lie - repeatedly pressured him to back up his and Stewart's assertion.

As Faneuil took the stand for a third day of testimony Thursday, Apfel tried to introduce e-mails to show Faneuil and Bacanovic had a joking relationship at work for months after Stewart's stock sale.

One e-mail was a to-do list that Faneuil had prepared for his boss, on which he added that Bacanovic could call him any time with questions - "but not too early, hee hee."

But U.S. District Judge Miriam Goldman Cedarbaum refused to allow the e-mails into evidence, and instructed jurors not to consider what they had heard.

On the witness stand, Faneuil admitted he joked with Bacanovic at work even as the broker was pressuring him. Faneuil described their relationship as "schizophrenic."

Apfel asked Faneuil whether Bacanovic had specifically asked him to lie to investigators. Faneuil said Bacanovic had not - but "I understood what he was telling me."