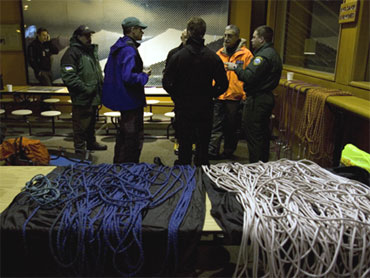 A decision Monday by U.S. District Judge Miriam Goldman Cedarbaum to allow Faneuil to testify was a boost for prosecutors because Faneuil's testimony — which had been postponed last week — is the most critical piece of their case.

Stewart and her co-defendant, broker Peter Bacanovic, are accused of lying to investigators about why Stewart sold her ImClone shares just before bad news about the company's new cancer drug sent the stock tumbling.

Cedarbaum Tuesday blocked prosecutors from telling a jury that Stewart's former stockbroker removed certain documents from his Merrill Lynch & Co. office while they were under subpoena.

Richard Strassberg, an attorney for Bacanovic, said the only documents removed were personnel files, and that Merrill officials authorized their removal. He called the prosecution attempt to put the issue before the jury "disingenuous."

"We don't know exactly what those documents were that were removed," prosecutor Michael Schachter told the judge.

The government also contends Bacanovic gave Faneuil extra vacation time and plane tickets in exchange for his support for the story that he and Stewart had a $60 standing stock order.

On Monday, the government called a Merrill Lynch & Co. administrator as a witness to show Bacanovic got Faneuil's pay boosted in April 2002.

Faneuil's testimony was delayed last week after the government turned over to defense lawyers documents that could damage the credibility of his testimony. Defense lawyers argued they should have received the material much earlier, and Cedarbaum said prosecutors had been too slow in turning it over.

Faneuil's testimony is vital to the government in laying out the sequence of events surrounding the ImClone sale, and backing up prosecutors' accusations that Bacanovic ordered Faneuil to tip Stewart about the sale of ImClone stock by company chief Sam Waksal and his family.

"Faneuil is an enormous part of the prosecution's case," says CBSNews.com Legal Analyst Andrew Cohen. "If his story seems credible to jurors, it paves the way for the government to sell the rest of the circumstantial case to the jury. And if Fanueil comes off poorly, it opens the door for the defense to convince jurors that the best evidence the government had to offer simply wasn't good enough."

Faneuil will likely testify the defendants conspired to mislead the government during an insider trading investigation.

"Because they can't charge her with the obvious crime, they're charging her with the cover up to the crime and so they're being very careful how they explain her actions," Alex Prud'homme, author of a book on the scandal, told CBS News Early Show National Correspondent Jon Frankel.

Cohen says Faneuil will face two cross-examinations, "one from Stewart's lawyers and one from the attorneys for Bacanovic, so Faneuil will be in for an awful time of it even if he ultimately succeeds in convincing jurors that the defendants were up to no good."

In testimony Monday, Stewart was "very hurried and harsh and direct" in a call to ImClone Systems headquarters on the day she dumped her stock in the company, a former ImClone secretary told prosecutors.

The testimony came as Stewart got support from entertainer Rosie O'Donnell, who sat in the front row for the third day of testimony and jokingly offered a prosecutor a bag of peanut M&M's as a bribe to drop the case.

"The rest of your life, you're going to be known as the guy who tried to take down Martha Stewart," O'Donnell said she told prosecutor Michael Schachter after jurors were excused for the day. "You should have passed on this gig."

Schachter grinned and politely declined the candy. "Thanks for coming," he said.

"I think it's a tragedy and a travesty what the federal government has done, not only to her but to the shareholders of Omnimedia," O'Donnell told reporter outside court, referring to Stewart's media company, Martha Stewart Living Omnimedia Inc.