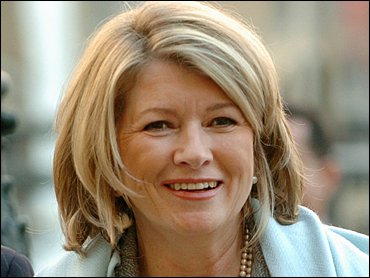 In most closing arguments in a criminal trial, prosecutors try to leave jurors with the impression that the defendant before them is sinister and spurred by evil motivation. The idea is to dehumanize the defendant as much as possible so that the jury has little or no sympathy for him or her when deliberations begin.

That's "Prosecution 101" and it happens all the time in cases big and small across the country.

But in their closing argument Monday morning in the Martha Stewart stock fraud trial, prosecutors tried mainly to portray the icon of domesticity and her former stockbroker, Peter Bacanovic, as lame liars. They did this, I suspect, because they don't have much evidence of maliciousness in this white-collar, non-violent, victimless alleged crime. They did this, no doubt, because they feel it's enough.

But that's the big question -- whether portraying Stewart and Bacanovic as the Abbott and Costello of stock sales will be enough to generate a conviction or two on charges of conspiracy, obstruction and making false statements.

To hear the feds tell it, Stewart and Bacanovic did what they wanted to do with her Imclone stock on Dec. 27, 2001 -- sell it before news hit that the company wouldn't get government approval for a product -- and then tried to come up with a reason to justify what they had done. Like Jon Lovitz, the "congenital liar" from those old Saturday Night Live skits, the government wants the jury to believe that Stewart and Bacanovic made up one lousy, false, almost farcical story after another when asked by authorities to disclose what happened. Prosecutors want jurors hearing in their minds Lovitz's classic, whiny: "Yeah ... that's it ... that's the ticket" each time they think of the defense.

Remember, even though this story is about insider trading, this trial is about covering up insider-trading; it's a case where jurors are being asked to consider it a crime to cover up conduct that has not been deemed criminal. So, first, the feds argue, the defendants decided they would falsely call the motivation for Stewart's sale "tax-loss selling," the art of selling some stock at a loss in order to minimum taxes paid on stocks sold at a gain. Prosecutors say that Bacanovic initially ran with that story until someone informed him that the sale of Stewart's stock resulted in a gain, not a loss, for tax purposes. Oops.

Next, the feds contend, the pair illegally agreed to say that they sold the stock on Dec. 27, 2001 because they had an agreement to sell it at $60 a share and that it reached that price that day. Prosecutors say the story is a "sham" because it wasn't the first one the pair came up with, because the stock was at $60 a share in the days prior to Stewart's actual sale, and because Bacanovic's initial message to Stewart never mentioned the $60 deal. Moreover, the government says, the pair never really got their own stories straight about the purported $60 deal and other witnesses can't fairly corroborate any such deal. Oops.

Michael Schachter, arguing for prosecutors, did a thorough job giving jurors the arguments they may use if they want to convict either or both of the defendants; rationale that the jury may rely upon during deliberations to link together the disparate pieces of evidence of the government's circumstantial case. He did this, I'm sure, because prosecutors always like to try to show jurors the way to a conviction and because in this case in particular common sense may be on the side of the government. I mean, of all the reasons given so far for the sale of the stock, the most logical, sensible reason is the one the defendants failed to offer: that Stewart sold her stock simply because she was leaning toward selling it anyway and that her broker told her Waksal was selling his. This explanation might have landed the pair in trouble -- maybe an SEC insider-trading action -- but they probably wouldn't be where they are today.

Schachter also spent a great deal of time weaving argument into fact because there are so few relevant facts in play in the case and because the narrative, no matter what side you are on, is so much more nuanced than you usually find in an average criminal case. The criminal conduct here, even if you buy the government's story, just doesn't jump out at you. That's why Schachter kept telling jurors that the defendants' conduct and explanations "just don't make any sense." Now, senselessness is not a crime -- not yet anyway -- but the prosecutor's point to jurors is that the defendants' stories add up to so little logic that they only can mean the defendants were lying when they offered them.

Speaking of lying, Schachter spent a ton of time during his closing argument emphasizing the credibility of Douglas Faneuil, Bacanovic's former assistant, who more than any other witness ties together the government's case. It was Faneuil who told Stewart that the Waksal family was selling its vast shares of Imclone, the company Sam Waksal had founded. It was Faneuil who took Stewart's sell order. It was Faneuil who was instructed by his boss to get in touch with Stewart. It was Faneuil who says he wasn't told about any tax-loss-selling plan at the time. But it was also Faneuil who lied initially to authorities and who now needs the feds to go easy on him when he is sentenced later this year.

The feds told jurors that Faneuil did his "level best" to give jurors the truth and the time they spent shoring up his testimony suggests not just how important he is to the feds but also how vulnerable they feel his credibility may be. As Schachter put it, "if you believe Doug Faneuil, this trial is over." But since the trial is not over, Schachter then gave jurors reason after reason why they should believe Faneuil. Instead of being a druggie snitch and a phony, as the defense claims, you would swear that Faneuil is a modern-day Abraham Lincoln the way prosecutors describe him; a paragon of virtue and sincerity.