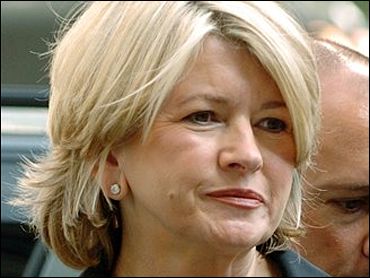 Martha Stewart said Monday she plans to write a book about her trial experience to help others facing that process.

"I think I'll write a book because I think it could be helpful to other people, just about what lawyer to choose, how to behave, how to attend an interview," said Stewart, who built a media empire on "how to" hints for the home.

Stewart commented on CNN's "Larry King Live," in what was her first live interview since Friday, when she was sentenced for her conviction on charges of lying to federal investigators and obstructing justice.

Stewart, who is free pending the appeal of her conviction, was sentenced to five months in prison and five months home confinement for lying to investigators about a stock sale.

Looking back on events Monday night, Stewart reflected that she had no guide to help her handle the trial process.

"There's no how-to book about this," said Stewart. "There isn't. And not that it's going to be a big best seller, but for anybody who has to go through this process, there should be some guidelines because guidelines would help."

Stewart, 62, and her former stockbroker, Peter Bacanovic, 42, were convicted in March of making false statements, conspiracy and obstruction of justice. Bacanovic, who received the same sentence, also was convicted of perjury.

Prosecutors said Stewart lied about the circumstance surrounding her sale of stock in ImClone Systems Inc. in late 2001.

Prosecutors said she did so after being tipped by Bacanovic's assistant that the company's founder and his family were selling their stock just before an unfavorable report from the Food and Drug Administration on ImClone's cancer therapy.

Stewart and Bacanovic maintained she sold the stock because of an agreement they had to unload it when it fell to $60.

Stewart also said she had spoken to ImClone founder Sam Waksal on the telephone since he was sent to a federal prison for tipping his relatives to the FDA report.

Stewart has said that she, too, can handle jail if she has to.

But she's doing all she can to avoid it, and has hired a new lawyer, Walter Dellinger, to handle the appeal.

Moments after her sentencing, he was introduced to the public and immediately began to tick off the numerous angles he intends to try in pushing for Stewart's conviction to be overturned - including alleged lies by a key government witness at the trial and by a man who allegedly lied his way onto the jury.

Stewart has also thanked her many fans for their letters and e-mails of support and has asked them all to keep buying her company's products - to keep her employees from being thrown out of work, as she says many were during the long investigation.