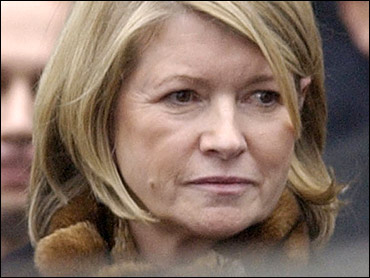 Martha Stewart asked a judge on Thursday to grant her a new trial, citing charges that a government witness at her first trial lied repeatedly on the stand.

The request, considered a long shot by legal experts, came four weeks before Stewart and former stockbroker Peter Bacanovic are to be sentenced for lying about a well-timed stock sale by the celebrity homemaker in 2001.

The motion argues the conviction is tainted by newly unveiled perjury charges against Larry Stewart, a Secret Service laboratory director who was called as an expert witness at the trial in February.

Prosecutors say Larry Stewart, who is not related to Martha Stewart, lied on the stand about the role he played in ink-analysis tests conducted on a worksheet prepared by Bacanovic. Larry Stewart has not entered a plea.

Court papers filed by lawyers for Martha Stewart said several other Secret Service officials were in court, monitoring the trial, and were aware of the perjury but did not say anything about it.

"Their silence is scandalous and not the way we expect the government to conduct itself," Stewart's lawyers, Robert Morvillo and John T. Tigue, said in a statement.

Legal experts say a new trial is not likely to be granted because the defense never disputed the central element of Larry Stewart's testimony — that Bacanovic used multiple inks on the worksheet.

"This is a serious motion and the judge will take it seriously but I'm not sure it's going to mean a new trial either for Stewart or her codefendant," says CBSNews.com Legal Analyst Andrew Cohen. "The testimony now in doubt had little to do with the case against Stewart. It did have something to do with the case against Bacanovic but on the one charge to which it related he was acquitted anyway."

Martha Stewart and Bacanovic were convicted March 5 of lying about why she sold 3,928 shares of ImClone Systems Inc. stock in 2001, just before the price plunged. Each is expected to get 10 to 16 months in prison at sentencing July 8.

Bacanovic was cleared of a charge of falsifying a document.