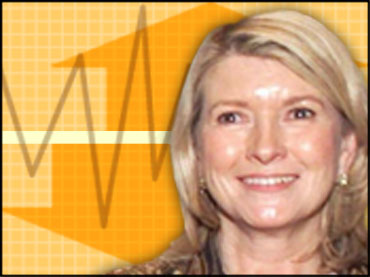 Martha Stewart says she might pass on her appeal and just serve her sentence, or might begin serving the sentence while continuing the appeals process.

"My company needs me, I would like to get back to work, I would like this to be over," the domestic entrepreneur told CNN's Larry King in her first live interview since being sentenced Friday.

Stewart was sentenced to five months in prison and five months home confinement for lying to investigators about a stock sale.

"I, as a person, with rights, with a belief in the judicial system and fairness, think that an appeal is the way to go," she said.

"She wasn't talking at all on Friday after sentencing about serving her prison term immediately. She and her lawyers only were talking about an appeal," Cohen said. "Now she says that's an open question and that tells me that there is a decent chance she'll serve her time now even if she also appeals."

"It's a choice between serving Stewart the person and Stewart the corporation," Cohen added.

Stewart also said Monday she plans to write a book about her trial experience to help others facing that process.

"I think I'll write a book because I think it could be helpful to other people, just about what lawyer to choose, how to behave, how to attend an interview,"

She said on King's CNN program Monday night that she had no guide to help her handle the trial process.

"There's no how-to book about this," she said. "There isn't. And not that it's going to be a big best-seller, but for anybody who has to go through this process, there should be some guidelines because guidelines would help."

Stewart, 62, and her stock broker, Peter Bacanovic, 42, were convicted in March of making false statements, conspiracy and obstruction of justice. Bacanovic, who received the same sentence, also was convicted of perjury.

Prosecutors said Stewart lied about the circumstance surrounding her sale of stock in ImClone Systems Inc. in late 2001.

They said she did so after being tipped by Bacanovic's assistant that the company's founder and his family were selling their stock just before an unfavorable report from the Food and Drug Administration on ImClone's cancer therapy.

Stewart and Bacanovic maintained she sold the stock because of an agreement they had to unload it when it fell to $60.

In Monday's interview, Stewart clarified comments she made earlier in a taped interview on ABC News that some interpreted as her comparing her ordeal to that undergone by South African leader Nelson Mandela

Stewart also said she had spoken to ImClone founder Sam Waksal on the telephone since he was sent to a federal prison for tipping his relatives to the FDA report.

Stewart has said that she, too, can handle jail if she has to.

But she's doing all she can to avoid it, and has hired a new lawyer, Walter Dellinger, to handle the appeal.

Moments after her sentencing, he was introduced to the public and immediately began to tick off the numerous angles he intends to try in pushing for Stewart's conviction to be overturned - including alleged lies by a key government witness at the trial and by a man who allegedly lied his way onto the jury.

Stewart has also thanked her many fans for their letters and e-mails of support and has asked them all to keep buying her company's products - to keep her employees from being thrown out of work, as she says many were during the long investigation.