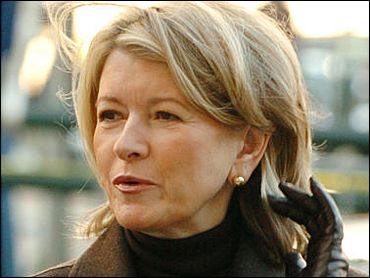 A federal judge Monday declined to rule on whether she would toss out any of the charges against Martha Stewart and her former stockbroker.

U.S. District Judge Miriam Goldman Cedarbaum postponed her decision after hearing a half-hour of arguments from lawyers for the defense and government. The lawyers worked well into the night Sunday to prepare papers on whether charges should be dismissed.

The prosecution rested its case Friday after 21 witnesses and 14 days of testimony.

Cedarbaum has appeared particularly interested in the possibility of throwing out the securities fraud count against Stewart, which accuses her of deceiving investors in her media conglomerate, Martha Stewart Living Omnimedia.

The judge has called that charge "the most problematic" of the five counts each against Stewart. Cedarbaum indicated it was highly unlikely she would dismiss all the charges, which also include five counts against codefendant Peter Bacanovic.

The government contends that Bacanovic, a broker, told Stewart that ImClone Systems founder Sam Waksal was frantically trying to sell his shares. Bacanovic and Stewart claim they had agreed to unload the ImClone shares when the stock price fell to $60.

The securities fraud count, which the judge herself has called "novel," refers to three statements Stewart and her lawyers made in June 2002 in which they insisted she sold because of the $60 agreement.

Prosecutors say that was a deliberate play to keep the stock price of Martha Stewart Living Omnimedia high. Stewart owned nearly all of the voting shares in the company, and stood to lose $30 million for every dollar MSLO stock fell.

Later Monday, a former lawyer for Douglas Faneuil, the government's star witness against Stewart, was called by the defense to bolster critical statements of Faneuil earlier in the trial.

Jeremiah Gutman, an 80-year-old civil rights lawyer, was called as a witness by lawyers for Bacanovic.

They were hoping to expose gaps in Faneuil's testimony. But instead, Gutman described Faneuil as afraid and distraught in the early days of the ImClone investigation.

The government contends Faneuil was being pressured by Bacanovic to lie to investigators.

Besides securities fraud, the remaining counts relate to whether Stewart and Bacanovic tried to hide the true reason Stewart sold 3,928 shares of ImClone stock on Dec. 27, 2001, just before it took a dive.

Seymour pointed to a speech Stewart gave at an investor conference on June 19, 2002 — an appearance she was not required to make — in which she tried to calm investor worries by claiming her ImClone sale was proper.

"She knew and she hoped investors would rely on her word," Seymour said. "She didn't just say it for no reason. She said it purposefully."

Stewart lawyer Robert Morvillo said Stewart was simply trying to clear her name against a rumor that eventually proved to be false — speculation that she had advance word that the government would reject an application to review ImClone's cancer drug.

The government never criminally accused Stewart of knowing about the report — only that Waksal was trying to sell.