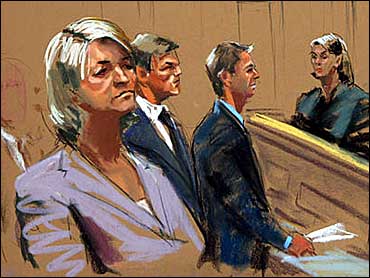 A day after she was indicted on federal charges of lying to investigators and investors, Martha Stewart went on the offensive Thursday with an open letter and a website professing innocence.

In the letter, published in a full-page USA Today ad and addressed to "My Friends and Loyal Supporters," Stewart predicts she will be exonerated and thanks fans for their "extraordinary support during the past year."

"I want you to know that I am innocent - and that I will fight to clear my name," she wrote.

On Wednesday, Federal prosecutors in New York charged Stewart with obstruction of justice, conspiracy, securities fraud and lying to investigators.

She pleaded innocent on all counts before a federal judge, saying "not guilty" in a calm, deliberate tone and with little expression on her face.

Later in the day, Stewart resigned as chairwoman and CEO of Martha Stewart Living Omnimedia, which has made her a fortune and stamped her style on everything from magazines and TV screens to bed linens and bath towels. She plans to stay on as creative chief and a member of the board.

The indictment stems from Stewart's sale of nearly 4,000 shares of ImClone Systems on Dec. 27, 2001 — the day before a disappointing Food and Drug Administration report that sent the biotech company's stock price tumbling.

Bacanovic also pleaded innocent to all counts against him, including perjury and obstruction of justice.

The charges carry a maximum penalty of 30 years in prison and a $2 million fine for Stewart, and 25 years and $1.25 million for Bacanovic. Any sentences would likely be much lighter under federal guidelines.

Following the indictment, the Securities and Exchange Commission filed a civil complaint seeking to ban Stewart, 61, from ever leading a public company and to limit her activity as officer of a public company.

Regulators also want the court to force Stewart and Bacanovic to pay more than $45,000 — the losses they say Stewart avoided by unloading ImClone stock before Wall Street learned legally that the FDA had declined to review ImClone's application for approval of its cancer drug Erbitux.

"This criminal case is about lying: lying to the FBI, lying to the SEC and lying to investors," said U.S. Attorney James Comey. "That is conduct that will not be tolerated by anyone."

Her attorney said Stewart was being unfairly targeted — perhaps because of her extraordinarily high profile.

Attorney Robert Morvillo also asked: "Is it because she is a woman who has successfully competed in a man's business world by virtue of her talent, hard work and demanding standards?"

In her letter, Stewart called the government's charges "baseless." Stewart claims to have had an arrangement with her broker for the automatic sale of the stock when it dropped to a certain price.

"I simply returned a call from my stockbroker. Based in large part on prior discussions with my broker about price, I authorized a sale of my remaining shares in a biotech company called ImClone," she wrote.

"I later denied any wrongdoing in public statements and in voluntary interviews with prosecutors. The government's attempt to criminalize these actions makes no sense to me."

At a hearing before U.S. District Judge Miriam Goldman Cedarbaum, Stewart was released without bail until her next court appearance June 19. Stewart ignored reporters and camera crews as she entered and left the federal courthouse in lower Manhattan.

The indictment does not claim Stewart had specific knowledge of the FDA decision — only that the Waksals were about to dump shares. She was not charged with criminal insider trading, a more difficult charge to prove than fraud.

The securities-fraud charge claims Stewart misled her own shareholders last summer, playing down the scandal in a clear attempt to keep her company's stock price from falling.

Stewart was a contributor to CBS News' The Early Show until last summer.