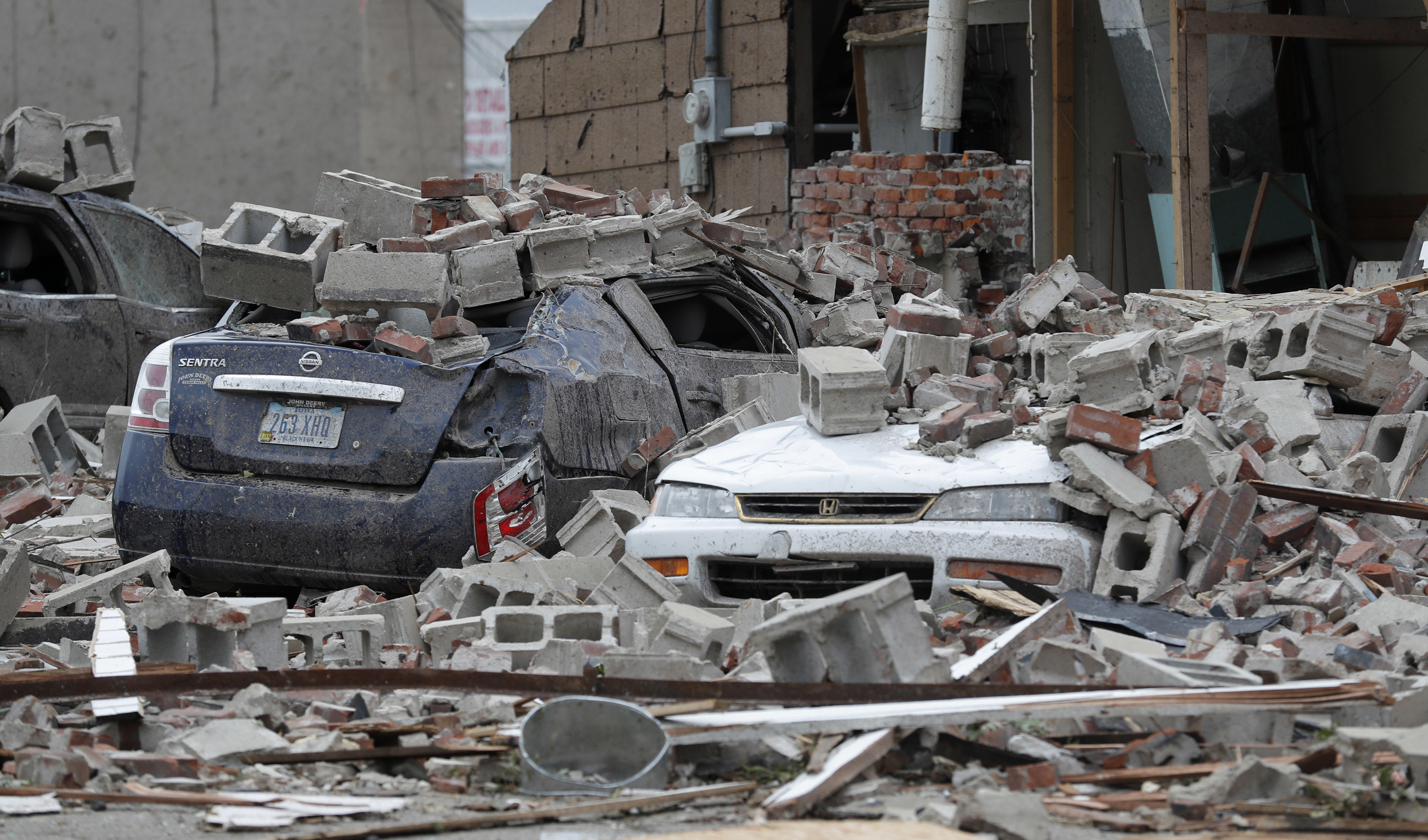 MARSHALLTOWN, Iowa -- With the scope of the devastation still sinking in, business owners and residents of the central Iowa city of Marshalltown on Friday began picking up bricks from collapsed buildings, dragging away downed trees and trying to return to the lives they knew before a powerful tornado roared through their community.

Structures throughout Marshalltown were hit by the Thursday afternoon tornado but some of the worst damage was to the historic courthouse and brick buildings that line the city's quaint town square. For years, officials and property owners have slowly worked to spruce up the buildings, only to see them devastated in minutes.

"Since 2002 we've spent $50 million in building renovations and now to see these, I'm just sick," said Jenny Etter, executive director of the Marshalltown Central Business District, a nonprofit group. "We were making giant strides in restoring the downtown so this is really devastating to us because we were on a roll. These buildings were beautiful."

At the 132-year-old courthouse, a blue tarp flapped over a gaping hole atop the clock tower after the cupola tumbled to the ground.

Local officials promised to rebuild, but some residents were too shocked to make plans.

Crystal Jensen, tears running down her face, said the storm passed in just three minutes, but it left her house in ruins and blew away photos and a bracelet from her father.

"I just lost my dad two months ago and this happened," she said. "I'm kind of at a loss."

Terri Shetler, owner of an embroidery shop on the town square, was digging out her 2017 Toyota Sienna, missing a front quarter panel, windows blown out and filled with mud, shingles and wood slivers.

"I'm pretty shaken. I came out and saw the courthouse and all this," she said. "But it can be replaced."

The tornado that hit Marshalltown was among a flurry of unexpected twisters that swept through central Iowa on Thursday, injuring at least 17 people and flattening buildings in three cities.

The National Weather Service said Friday that at least five tornadoes and likely more struck. Meteorologist Jeff Johnson said it will take days to determine their strength and total number.

Marshalltown, a city of 27,000, was hit hardest. Officials said 10 people were injured and at least 28 people were relocated to an emergency shelter.

About 200 workers from several states were scrambling to replace 500 utility poles and restore power to thousands of customers, said Alliant Energy spokesman Justin Foss. Natural gas service remains shut down in part of the city, he said.

Stephanie Moz said she was in a clothing store downtown with her family when tornado sirens went off. They took shelter in the building's basement and heard "booms" and "explosions" as the tornado passed. "We went through a tornado and survived," Moz told CBS affiliate KCCI. "I'm happy."

She said the storm broke out a window, ruining clothing on display and destroyed her husband's car.

The local hospital will be closed for an undetermined period after the building was damaged and 43 patients were taken to nearby communities. The hospital emergency and urgent care services were moved for now to another building in Marshalltown. Tornadoes also ripped through the central Iowa cities of Pella and Bondurant, damaging homes and a factory.

"This is the widest area and the most destruction," she said in Marshalltown. "Multiple buildings and facilities. It's just unbelievable when you take a look at the devastation and destruction that we see."

In Pella, seven people suffered minor injuries when a tornado hit the agricultural machinery maker Vermeer Manufacturing, scattering huge sheets of metal through a parking lot and leaving one building with a gaping hole.

The National Weather Service confirmed it was an EF3 tornado, with winds about 144 mph. Several homes were destroyed in Bondurant.