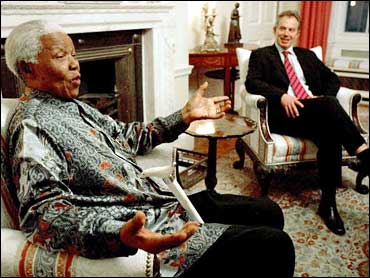 Britain has made fighting poverty in Africa a top priority of its yearlong chairmanship of the G8 group of wealthy nations, which includes the United States. Brown said the new proposals would be presented to G8 finance ministers and leaders ahead of a summit next month in Gleneagles, Scotland.

Brown proposed erasing all the debts African nations owe to multilateral institutions like the World Bank, the African Development Bank and the International Monetary Fund.

He also proposed boosting direct aid payments, selling bonds on the international market to fund immunization programs and eliminating trade barriers that make it difficult for African nations to sell goods in the rich world.

"These proposals represent a new deal between rich and poor countries," Brown said in Edinburgh, Scotland. "We are determined the empowerment of the people of Africa ... can be made possible by decisions at Gleneagles."

"The scale of what we outline is very substantial indeed," Brown said.

"There is a desire that public generosity be given enduring purpose in a new relationship between developed and developing countries that tackles global poverty, global illiteracy and global disease," he said.

Brown's announcement came three days after a news conference by Bob Geldof, the musician and social activist who organized the Live Aid benefit concerts for Africa in 1985.

Geldof said Tuesday that after persuasion from fellow Irish rocker Bono, he had agreed to stage a follow-up event: Live 8, concerts in five locations around the world on July 2, right before the G8 summit.

"It strikes me as being morally repulsive and intellectually absurd that people die of want in a world of surplus," said Geldof. "This is to finally, as much as we can, put a stop to that."

The purpose of the Live 8 concerts, said Geldof, is to raise political consciousness and support for G8 measures to help African nations, including debt forgiveness.

Africa is expected to be high on the agenda of the meeting of the group of eight wealthy nations: Britain, the United States, France, Germany, Russia, Canada, Italy and Japan. British Prime Minister Tony Blair has said he wants rich nations to write off the debts owed by the world's poorest countries and to double international aid, initiatives the White House has ruled out.

"We obviously welcome any campaign which raises awareness of the need for action in Africa," a spokesman at Blair's office said Tuesday. "The prime minister is obviously working very hard to secure a comprehensive outcome for Africa at the G8 summit."

Live 8 concertgoers and watchers won't be asked to make donations but will be asked to go to Edinburgh, Scotland, where he expects a million people to gather for a mass protest as the G8 leaders meet in nearby Gleneagles.