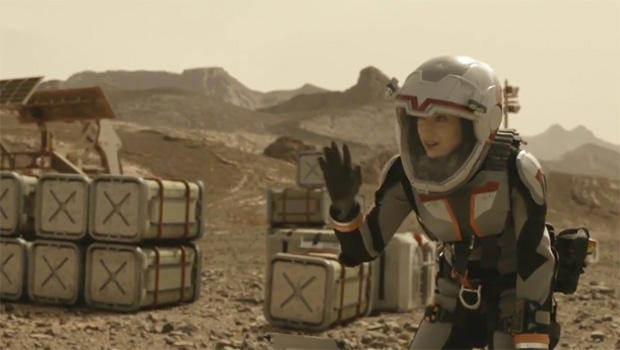 "Mars," a new series on the National Geographic Channel, marries the documentary form (incorporating interviews with people on how travel to Mars may become a reality) with a fictionalized account of a manned mission to the Red Planet in 2033.

The series follows the six-person crew of the Daedalus encountering mission mishaps as they become the first humans to set foot on the Martian surface.

John Grunsfeld, a former NASA astronaut and one of the show's experts, told "CBS This Morning" that what he loves about the series is that "it feels real."

"It matches the documentary side with experts on space exploration, people who've been in space, [with] a great science fiction story that draws you in and makes you believe it can really be true, it can really happen. It does that for me as a space guy."

The series depicts the challenges humans will face exploring and colonizing Mars. Grunsfeld pointed out that there are similarities between Mars and Earth: "It's a little smaller, but it has enough surface gravity you can kind of walk on the surface. It has an atmosphere, but it's a thin atmosphere, so we're going to have to be in space suits. But people who live in Fairbanks have similar temperatures. It's not outrageously cold, especially if you're wearing a spacesuit.

"The series shows you we really could live on Mars in principle. It's not going to be a great life; people in Fairbanks in winter might say the same thing!"

Grunsfeld said part of exploration is man's desire for adversity, which he shares. "I like to test myself and take challenges," he said.

South Korean musician and multimedia artist Jihae plays two characters: Hana Seung, the pilot and systems engineer of the Daedalus, and her Earthbound twin sister, Joon Seung, a communications specialist at Mission Control. It was her first acting role.

She agreed with Grunsfeld about testing adversity. "Hey, I took on two roles! It was scary but a very exciting challenge," she said.

To watch a trailer for "Mars" click on the video player below.