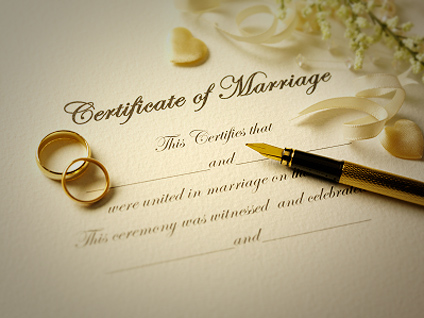 Not really, say authorities in Southern California, who arrested an Orange County couple and their daughter Wednesday on charges of arranging fake marriages for more than 20 foreigners trying to stay in the U.S.

Ajit Bhargava, his wife Nisha, 56, and their daughter Runjhun, 30, were arrested at their home in Yorba Linda and are charged with conspiracy to commit visa fraud, federal prosecutors said.

Authorities said the Bhargavas ran immigration services company MPEagle Consultants in Cerritos, Calif., and charged as much as $60,000 to arrange bogus betrothals for foreigners who came to the country on visas, mostly from India.

Authorities said the fraud used the same witnesses, and sometimes, the same U.S. citizen spouse, on multiple green card applications, and had each take photographs in different locations wearing different outfits to make it look like they had a relationship.

But it appears the honeymoon is over.

Immigration officers noticed the pattern and forwarded 21 similar-looking cases to investigators at Immigration and Customs Enforcement.

"They were just recycling marriage certificates. They were even using the same witnesses, a couple of applications had the same U.S. spouse," said Joseph Macias, who heads ICE's homeland security investigations in Orange County. "It got to the point where they didn't care. They thought they were just kind of above the law."

In a 75-page affidavit, authorities said the Bhargavas paid an associate to recruit unemployed and low-income U.S. citizens - who were often homeless or drug addicts - to enter into the marriages. The U.S. citizens were offered $2,000 for the ruse, but often weren't fully paid, court papers said.

Nisha and Runjhun Bhargava entered not guilty pleas in federal court on Wednesday, said John Barton, an attorney for the daughter.

Ajit Bhargava was not in court because of a minor medical problem but will appear Thursday with his wife and daughter for a detention hearing, Barton said.

To date, the U.S. citizens and foreigners who entered into the bogus marriages have not been charged. The investigation is ongoing, Macias said.