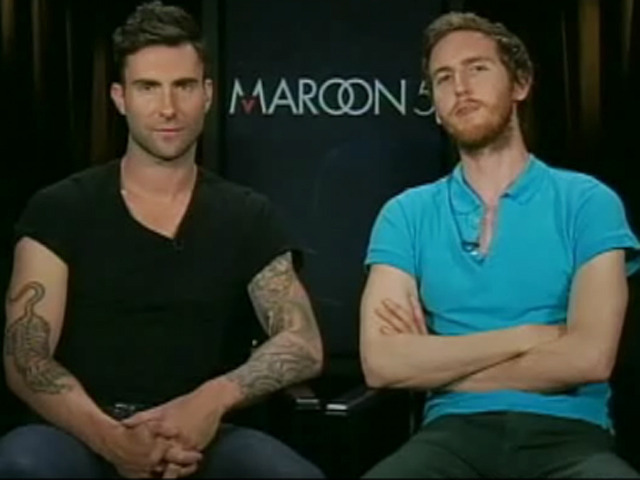 NEW YORK (CBS) Maroon 5's lead singer Adam Levine has dated a lot of beauties while living a rock-star lifestyle, but when it comes to music there's a new "lady" he set his eyes upon - Lady Antebellum, that is.

The soulful, funk-rock-pop crooner and his band teamed up with the Grammy-nominated and CMA award-winning country artists for "Out of Goodbyes," a new track off of Maroon 5's highly-anticipated third album, "Hands All Over," which is set to be released on Sept. 21.

"We are so happy with how it turned out," Levine told CBSNews.com. "They did an incredible job. We wrote the song and her voice (Lady Antebellum's Hillary Scott) was perfect for it and the band filled in the spaces in a beautiful way. It was a great collaboration."

Pictures: Scenes from the ACM Awards

Although Maroon 5 shows a softer side with "Lady A," Levine isn't any closer to figuring out what love is really all about. The newly-released, ironically upbeat single "Misery" touches upon lust, love and the desperation of trying to make a relationship work.

"I cry myself to sleep every night... I'm just kidding," Levine joked about the meaning behind the song. "I say this a lot but, I love the idea of having a really happy song with ... I love the 'bittersweetness' of happy songs out there, it's my favorite," he added.

In true Maroon 5 fashion, the "Misery" music video is sexually-driven, yet, this time it's quirky, violent and filled with stunts while poking fun at the drama in relationships. Levine's real-life girlfriend, Sports Illustrated model Anne Vyalitsyna, dominates the video while she attempts to kill him on the streets of Los Angeles by beating him, throwing him into oncoming traffic and shooting a bazooka at him, among other things. Levine took part in some of the stunts, but the majority were done by professionals.

Levine and bandmate, keyboardist and childhood friend Jesse Carmichael gushed about working with rock studio legend Robert John "Mutt "Lange on the new album, which was recorded in Switzerland.

Lange, who helped catapult his ex-wife Shania Twain's country music career, also produced huge hits including Def Leppard's "Pour Some Sugar on Me," AC/DC's "Back to Black" and Bryan Adam's "Everything I Do (I Do It for You)."

"He's a genius and it was amazing working with him. Wow, what an experience," Levine said. "It was unique for us. We had never gone abroad to record before. He's just one of those guys who's done everything and has done really well and it was cool to have a different perspective on the music.

The three-time Grammy winning band's previous albums include, "Songs About Jane," as well as the double platinum "It Won't be Soon Before Long." Maroon 5's releases have gone gold and platinum in over 35 countries around the world.

"Hands All Over" is reminiscent of albums past, but encompasses a larger variety of genres this time around.

"This album has a lot of different styles - a little Motown, a little country, a little straight ahead rock n' roll and pop music," Levine explained. "It's everything we love all wrapped into one beautiful package."

Maroon 5 kicks off its summer concert tour on July 30 and will feature a rotating group of special guests with Owl City, Guster, Kris Allen, VV Brown and Ry Cuming.=http:>