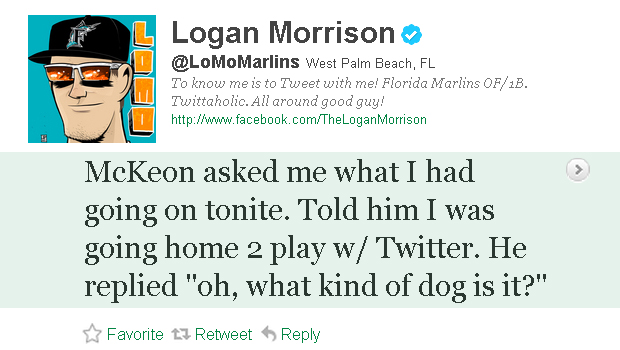 (CBS/AP) Much has been made of the Florida Marlins' decision to hire 80-year old Jack McKeon as their new manager.

After all, he's the second-oldest manager in major league history. Only Connie Mack, who managed the Philadelphia Athletics until 1950, was older (he was 87).

The questions about McKeon were obvious: Can an octogenerian endure all the cross-country travel and late nights? Will an old-school mentality translate in today's game? Can he really motivate 23-year-olds?

Well, the manager has managed to amuse at least one 23-year-old, Marlins' outfielder Logan Morrison.

"Jack McKeon asked me what I had going on tonite. Told him I was going home 2 play w/ Twitter. He replied 'oh, what kind of dog is it?'"

Now, it's possible that Mckeon was joking. After all, when he was introduced as the new manager, he intentionally messed up Marlins president David Samson's name at the press conference, presumably to pretend he was having a "senior moment."

It's also very possible Morrison was joking. After all, he's already gained a reputation for Twitter wisecracks - some of which have the Marlins brass, including the team president, a bit worried.

"I'm not a dinosaur," Samson told the AP last month. "But I'm not thrilled. It's very scary to me. I've told Logan, `People are waiting for you to make a mistake. They're going to bait you on Twitter to say something inappropriate that you can never take back.'

Of course, the "Twitter-dog" tweet is harmless and hilarious - and probably true. McKeon, like most 80-year-olds, likely has no clue what Twitter is. But he is sure to be well-acquainted with the microblogging service soon thanks to Morrison, who claims over 26,000 followers on Twitter. In fact, soon after the left fielder reached the majors last July, his followers outnumbered attendance at the typical Marlins home game.