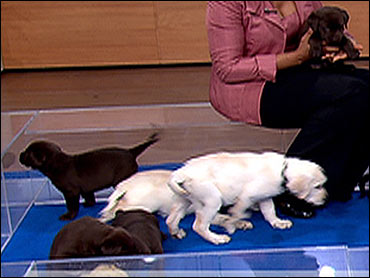 People love Labrador Retrievers, and they may love them even more -- or maybe not! -- with the release next week of the movie "Marley and Me."

The touching romantic comedy stars Jennifer Aniston and Owen Wilson and features a Lab that's -- problematic, to say the least.

But on The Early Show Friday, resident veterinarian Dr. Debbye Turner Bell said Labs generally make great family pets -- provided you raise and treat them right -- and aren't like Marley. They tend to be smart, loyal, easily trained, and well-behaved.

She also offered tips on choosing a breeder, and advised against adding a puppy to the family over the holidays, which tend to be hectic.

For good measure, Bell brought a bunch of Labs to the set!

She pointed out that Labs are "sporting dogs. They were bred to hunt with their owners, and to go retrieve things, so they are full of energy. And if you don't socialize them properly, and train them, and give them all the exercise they need, they can become destructive like Marley."

Labs, Bell says, are strong, hearty dogs that can work for hours, or just sit by their owner and watch TV.

And, she added, "Every Lab isn't like Marley. As a matter of fact, this is the most popular breed in the United States, according to the American Kennel Club, and we use them for support dogs for the blind, for the elderly, for law enforcement. But they have to be trained and they need exercise.

"They're very good with kids. Very patient. They tolerate kids poking at them, pulling their tails, that kind of thing. But again, it's important to socialize them from the time (they're young), so they will be OK. I have heard of some Labradors that are nippers, but those are the exceptions, not the rule."

Labs can grow quite large. Females are usually 55-70 pounds, males between 65 and 80 pounds. They come in three colors: yellow, black, and chocolate.

In, general, Bell pointed out, there are "some great adults" of any breed in rescue groups. But, "If you must buy a (Lab or other type of) puppy, you want to go to the breeder and see the facility. You want to see where they were born and being raised. (The facility) needs to be clean. (You don't want to see) rows, rows, and rows of kennels, like a puppy mill. You want to ask a lot of questions. One of those questions is -- ask to see the parents. Most breeders -- all breeders will have the mother.

"(That way) you can tell what the puppy is going to be like, because they are the genetic summation of the mom and dad. So, you want to see the mother and ask for the father, too, and to make sure they are big and healthy and strong. You also want to ask for health certifications of the parents. Labrador Retrievers have a couple of diseases that are inherent in the breed ... and their parents need to be free of those diseases. ... You also want to ask about a return policy. A good breeder will take the puppy back if anything goes wrong or if you can't keep the puppy at any point in their life."

Turner stressed that the holidays aren't a good time to bring a pet into your home, saying, "We're too busy. There's decorations, too much going on. You want to bring a puppy in the home when it's quiet and calm. So wait until the new year if you must have a puppy."

For more on Labs: